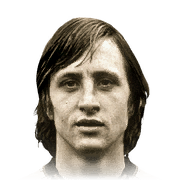 When it comes to stats, he's like Gullit - his stats are excellent on the face of it, but he performs even better in-game, hes got that magic touch.

nothing special, CR7 on get in behind, cruyff on stay forward.

Vieira and Ndombele on cover center, Ndombele also on cut passing lanes and Sandro/Alves on stay back while attacking.

Pace 9/10: he's fine, not as fast as Mbappe or Neymar but he's pretty quick when you need it.

Shooting 10/10: he is crazy. It feels like the patch didn't affect him.

8 out of 10 green timed finess from arround the box will still find their way into the back of the net. In the box he is deadly.

Left foot, right foot, it doesn't matter, his 5* WF is a weapon ingame.

His attacking position is unbelievable, he always finds the free space and runs into it.

Passing: 10/10: thanks to his WF he's able to find his teamates with an ease. His vision helps him allot.

For me he didnt had that much assists till now - only 16 - but he's my goto player when i'm on my way into the box of my opponent.

Dribbling 10/10: his agility on the ball feels sooooo damn good. He's by far the best player i played this year in terms of agility & ball control.

Physicality 7/10: he's not the strongest guy but his agility helps alot.

His stamina wasn't an issue for me, he's still on 40% at the end of the game.

It could be better but i'm fine with it.

I tried so much players on this position this year and he is by far the best i've used.

I tried Gullit 90, R9 94, Socrates Prime, Neymar TOTY and a couple of others, no one felt so special like Cruyff.

He lifted me to the next level and i don't think he will leave my team anytime soon. This team with Cruyff is the best team i ever played with and i enjoy every game with it.

Hey guys, it's me again.

After searching for an alternative for my prime Henry (who is amazing, just want to test a lot of prime icons), this guy was getting my attention. After packing baby gerrard from an SBC, the financial factor was fulfilled.

I played him in a 41212(2) as a striker next to CR7. After some reviews on YT and seeing this guy played by a lot of esport-legends, i was quite happy to play him. Bought him threw the web app and was pretty excited to try him out at the evening. Then I was getting on the ground of the hard facts.

Pace: Pretty fast. With hawk 98 acceleration and 94 sprint speed is a lot - but not really necessary this season of fifa. Davidson Sanchez and VvD will still catch up und push him away. But in case of the whole pace balance this year 9.5/10

Shooting: with hawk nearly everything is 99, except of shot power and longshots (98 pen. doesn't really count in my opinion). To be fair: his shooting was really phenomenal. Powerful shots, finesse, even low driven will get in with a 95% probability. 10/10

Passing: For a striker outstanding, you can play him too in cam spot. Amazing vision, nearly perfect curve and passing abilities. If you play tikitaka, this property will fit perfectly in your gamestyle 10/10

Dribbling: His dribbling abilities are not limited. 5* weak foot with this dribbling stats will work. If you can use skillmoves with positive influence on the game, you will have right here a good and expensive guy.

Defending: not necessary for a striker, with his "low" stamina, physical aspects and workrates, you dont want to run back with him. Now with the new update, stamina goes down way faster, so just don't do it. N.A/10

Physical: Here is the reason why Johan don't work for me. I don't expect the strongest strikers like Lukaku this season, but they must show some resistance to maybe delay the possiblityfor loosing the ball. Cruyff is so fu****in weak. He was so often on his backside. This fact limite his way of using a lot. As mentioned, stamina is allright - not the best, can be worser. His heading is disgusting. 2/10

I hoped with his workrates and 5* combo, this guy will outperform my Henry - after 10 games he gets immediatly sold and I bought my Henry back.

For me this guy wasn't the factor i expected, in case of his high pricing. Maybe he work better with your own game style, maybe he needs another chem. style, maybe he will getting better at CAM. But for me, Henry is way better and around 1 million coins cheaper.