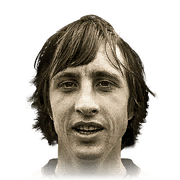 This card is hands down the best I have used in any Fifa. I use him as the central CAM in a 4231 formation, he is expert at playing off the striker as a CAM/CF and on the edge of the box defenders are scared to tackle him. Work yourself some space and pull off a timed finesse, it goes flying in the top corner. I've used him in Division Rivals and he's scoring crazy amounts, actually looking forward to playing champs this weekend with this guy.

Yes... he costs more than 2 mil, but I would recommend to anyone who can afford as he plays out of his skin.

93 Acceleration and 94 agility and other dribbling stats do not lie, when Cruyff has the ball you feel like you can do anything, and it turns out... you can!

5* Skill moves are fluid and so easy to use, just play with the RS and watch him beat defenders from all angles. 5* weak foot means there is no need to think about where you are on the pitch he will be able to get a shot on target.

His finishing is clinical, with his 91 finishing, in the box he cannot be stopped. It's obvious, with his 91 curve and 90 long shots, that his finesse shots are incredible and if it's well timed it will go in the net. His passing and build up play, ability to create chances for himself and others is second to none and pulling off a skill goal with him feels incredible. I have never had so much fun with a player.

I have not noticed too many cons to him yet, only in the way people target him once they see what he can do, he will be pressed and he will get crunched but most of the time you are able to avoid this with his ball control and skill moves. Try not to rely on just Cruyff because otherwise you become predictable, however he will pull through and change games for you when you most need it.

His stamina is okay, he will end up on red by the end of the game if you use him as much as I do but I have not noticed the effects of this in game, only after when you have to put a fitness card on him.

His strength is low, but iI think his height and agility make it difficult for players to get the ball off him.

This has been the best decision ever, This Cruyff card is just EFFORTLESS: finishing, passing, runs, skills, everything... It just comes natural and makes the game easy and fun to use. Inside the box? outside the box? finesse? power shot? NO PROBLEM

Contrary to most of the people that have this card, I play him at ST on a 4-3-3 with inform Mbappe with free roam and Cruyff is just a BEAST. His finesse shot alone makes him miles better than Pele and with High/low work rates, he is just ALWAYS in the right spot at the right time, no waiting for him to get into a danger position and he just makes the BEST runs to get free, evading the strong CBs.

I really couldn't find any because even if he is not the strongest, he finds a way to evade contact with the strong centerbacks and just glide pass them