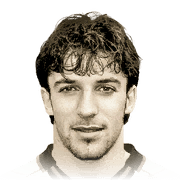 What a player. I played him first as a ST next to Aguero in a 4-2-2 and now as a Cam in a 4-2-3-1. I can say, it doesn´t matter which position he plays, he is 100% worth the money. He is one of the best Cards i played so far in FIFA 19. He can score from every angel with his 5 star weakfoot and can easily play 90mins. Suprisingly with his 40 defending he can conquer the ball very good.

Del Piero, or Del P as he is called sometimes, is one of the best strikers/midfielders in this game. He can play anywhere in the attack and he will score goals for fun. IMO he is not the best as a lone striker but in a 2 striker formation he will get the job done. I prefer do use him as a left cam or as left striker in a 4231 (playing left cam) or a 4312 as a left striker.

Del Piero is therefore one of my favorite attacking players this year and the only other players that has blown my mind as Del P has done is TOTY Neymar, CR7 and possible Ibrahimovic.

Keep in mind I play in Div 2 in rivals and I finish elite 3/ elite 2 regularly in Fut champs. Before Del P I was an Gold 1 merchant but he has turned me into a elite player.

Aerial threat (since he is not very tall)

Possibly price if you don't have the coins

Played him as ST in a 4-4-2 next to Dybala and at half time with tevez.

He offers much opportunities for building an offensive Play or solo.

Dangerous as well in clunky situation in enemys defensive phase.

I just love to play with him, totally worth the money (he aloneis worth a third of entire squad (in Coins)).

Little bit sad that he doesent put out the thongue if he scores but nice intro to the match when starting it.

strange timed long shots form about 25 meters and more. If accurate ennough, its getting dangerous for the enemy.

Used him only for Weekend League so far and he helped out a lot.