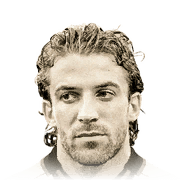 He can play as a CAM, CF and ST. His shooting and dribbling are unreal. Superb on and off the ball. The 5 stars weak foot makes him a threat from everywhere inside or outside the box. I scored some amazing goals using the finesse shot with this player. Even though his speed is not the best, he feels a lot faster in game. His passing is good, not the best for long passing but its good enough. Comparing him to Roberto Baggio 93, i have to say that they feel similar on the ball but Del Piero has better shooting and a 5WF which makes him more of a threat towards the goal, where Baggio is more of a passing / dribbling player.

Stamina at extra time and sometimes around the 75 - 80th min

Wanted some great goalscorer so I was trying some icon strikers like Hernandez, Kluivert (baby & prime), Trezeguet (prime), Butragueno (baby & mid) but none was so good like Del P. I had baby Del P before and he was pretty good but wanted and upgrade so I bought 90 Butragueno. Butra is good striker but his finesse shots are horrible and he wasnt as good as I expected so I wanted to come back to Del P. I didnt know if I should buy baby Del P back or try 90 because 90 Del P have M/M work rates and I didnt liked it on Butra (also M/M).

I decided that I will try 90 Del P and I am happy! Even when he is bit slower than baby version and with M/M workrates as Butragueno - its not a problem! With Hunter chem his speed is more than enough! His finesse shots are just awesome and his agility is superb. Also his 5* weak foot is great. I didnt played much games with him so far but I know that he is my striker for many Weekend Leagues in the next weeks. SIMPLY GREAT STRIKER FOR REALLY GOOD MONEY! Really recommend!