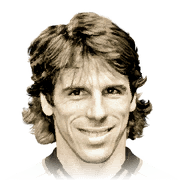 This card is unreal, before I had Prime Raul, I used 87 Zola as a lone ST and WOW was he good! He scored for fun. I'm a bang average FIFA player and even in the weekend league Zola was getting plenty of goals. His goals to game ratio (84 in 53 games) was coupled with a great 32 assists.

I swapped him for an upgraded ST and instantly regretted it. I could feel that he was missing. Which surprised me as I had bought a player with far greater physicality and pace. After struggling through a fair few games, I bit the bullet and re-bought 87 Zola. Once again he started to score for fun!

When I did the Raul SBC, I had to change him to a CAM which was fine. He played amazingly there as well and although his goals weren't as frequent he was still getting around a goal a game but his assists went through the roof.

Dribbling is class with great balance

Finishing is incredible and seems far better than the 87 stated.

Height (But I did still get a few goals with headers)

Strength (Can get pushed off the ball from time to time, however it often led to me winning a FK)