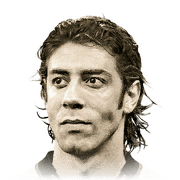 If you are looking for a great CAM this is your man. His passing and set pieces are unbelievable, his ball control is amazing and the ability to create chances is fantastic. I tried this card with sniper and deadeye due to his low base finishing. Both looked and felt good in game but deadeye was a bit better for me. He is always in the right position, his attacking runs are really good and his stamina lasts for 90+ mins. He is not the quickest player in fifa but with 86 dribbling, 86 agility, 88 strength and 92 ball control you can make some defenders cry.

I would prefer a little bit more aggression

Well, this was the second time I got Rui Costa via SBC, and if I get the chance I will do it again in Fifa 20, just the perfect CAM.

Although you have to spend a few hundred coins and maybe some untradable players in order to complete the SBC, Rui Costa is absolutely worth it to me:

For me he works perfectly in a system with 4 high-pace players in the wing (I have Sandro, Insigne/D.Costa, Cancelo and Callejon/Cuadrado). Truly a game changer in midfield for me.

I honestly was hesitant to do his SBC. I saw his card and thought it was decent, but I didn't exactly like his card on World Cup Mode last FIFA. I watched a few reviews on him then I decided to do his SBC. It was totally worth it. I have played 15 games with him using a Sniper chem style and in those games he has scored 18 goals and 6 assists. For me he controls the whole attack and the tempo of the game. I really have enjoyed him in there games and do not regret doing the SBC. If there was a player it could compare him to it would be Dybala because of the way the play, but Costa is stronger and has slightly lower dribbling.