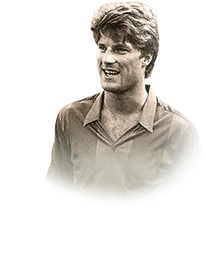 After seeing that there aren't any review about this 92 Laudrup, I decided to make my own one, when I saw his SBC and thought on how cheap it would cost for me (just 100k spent) I gave it a chance, and boy, what a player. Put him in my squad on a 4-2-3-1 with him being the CCAM alongside with Neymar and Ben Yedder SIF and Richarlison SIF upfront being guarded by my big boy Fabinho and the tiny Pitbull Kante, I managed to win 20 matches out of 29 from Weekend League and Laudrup was by far my best player, he scored 21 goals and assisted another 13. What makes Laudrup so good is his masterly passing (his vision is unreal, always making great chances with just one pass), his dribbling is superb too. His shooting is not so good, he will score many goals if you are calm in front of the goal and don't simply shoot without a real scoring situation (he will not score from crazy angles or anything like that). To counter that I slapped a Hunter on him to boost his pace and shooting, another thing to say about him is his runs, holy mother, so many great runs, always clearing up spaces and creating chances of goal. His reactions are pretty great too. His stamina is something like a 8/10, that's the other con about him, of my mid 3 (Neymar, Ben yedder and him), he was the one that suffered by most, pretty similiar to yedder, he won't hold the extra time, I was replacing him by the 70' minute, something like that. Another stuff to talk about is his crossing and corner kicks, the boy is a monster, the ball will go in the place you want, on my case it was Ramos' head.

Passing, superb. Best player i used in terms of passing the ball

Positioning. Always on the right place at the right time.

Pace.Another pro about him, with Hunter he is pretty quick.

Dribbling. The ball will stick on his feet and with his high reactions many times he will recover quickly.

Crossing. Superb, monster in these situations.

Heading. He is not the player to win you headers against tall CDMs like Fabinho or Pogba, but he will win against guys like Kante (most of the teams).

Shooting. As I said, the thing about his shooting is that is not a CON (scored many goals for me in weekend league), but you have to know the right time to shoot, in front of the goal he will put the ball in the back of the net, but don't be flushed, if you are, he will miss some great chances.

Physicality. He is pretty tough on the ball and I was really surprised, I guess that's because of the high reactions and ball control, many times when the defender is pushing him of the ball he looses control of the ball but OUT of nothing he comes straight to recover it. Like the shooting situation this is not a CON, and, by the fact that he was playing CCAM, his physical was not very important for me, I wanted him to move the ball forward and bang goals and assists and he made it.

Stamina. That's the only con that I found about him, he will run out of gas at the extra time, I recommend to sub him between the 70' to 80' minute.

I had a lot of untradable players in the club and made the sbc for about 200k. For the modest of 200k it feels like steal and it is definitely like stealing if I look at what this card brings. As the title goes, it's actully what this card is, a true playmaker. Laudrup makes the attacking so much more fluent and gives a lot more spaces on the last third of the pitch. Some would say by looking at his stat of shooting, that it's a bad card, but listen here. In these days you can't score all these timed finesse like before and it's more important to create goal chances close to the goal. By looking at the stats after 36 matches it's clear what this card provide.

None if you use him correct.

So, I did the Laudrup SBC for about 150K and haven't regretted it since. Bought his 91 a few months ago and thought is was a waste of coins.

Played 10 games with him as a LAM in a 4-2-2-2 and he is crazy good. He has the pace to go 1v1, track back a player when losing the ball or to go out wide, lose the fullback and cross the ball to one of my strikers. His shooting isn't great with a basic chem style, so put a marksman on him. With a marksman his shooting is really good, but don't rely on him making 4 goals every match. Passing is sublime. He creates lots of chances for my team with his high vision, his short passes often get my strikers in a 1v1 position and his crosses are really good. Laudrup feels really smooth on the ball and with his high reactions, he's always a step ahead of his opponent. With his 76 jumping, he wins most of his headers and his 71 strength in combination with his dribbling makes him a real pain in the ass for my opponent. The only real issue I have with this card is his stamina. Around the 74th minute I have to sub him 'cause he can't make the right runs anymore.

- Pace, quite fast, but don't expect him to be Usain Bolt

- Dribbling: very smooth on the ball and keeps it close to his feet

- Shooting, if you put the right chemstyle on him

- Shooting if you don't put the right chemstyle on him

- Stamina is bad (for my playstyle)