So, Wout Weghorst. What is there to say about this man, except that he is an animal. I have never been so pleasantly surprised in my life. I like to play crossing football, and I can say that this man is the best Aerial Threat that Fifa has blessed me with. I played him with HAWK chem style, which gave this man the most unfair statistics that I have ever seen. 95 SHOT POWER, 93 STRENGTH, and 90 JUMPING on a 6"6 behemoth means that if you hold L2 in the box or off a goal kick with this card, it is physically impossible for him not to win the ball. Albert Einstein once proposed that the speed of light was the fastest thing could exist. However, Einstein never saw Wout Weghorst head a football. This human should be banned from all consoles, as he has proven that man has indeed meddled in matters that far exceed their knowledge. He is the unknown God of fifa 18. 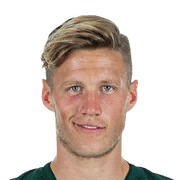 EA. What have you done. I was but a mere youngling when the first inform of this card was graced to me, and after playing a single game I was gifted 5 goals, a rage quit, and a death threat. I felt my body go through puberty with every game, and by the time this card was I released, the first IF Weghorst was the sole cause for my lumberjack beard, and my parents divorce as they realised that my only idol in life would be Si...
Read full review

Wout Weghorst: what an elegant player!

once i reached 100 matches played with him i feel able to write a review about Wout. i played mostly fut champions matches and he never disappointed me, i builded my team around him and an easy football concept idea: crosses and high passes. in order to make it effective i chose to use a narrow 4-1-2-1-2 pairing him with TIF Poulsen and behind them UEL Rebic (the amount of strength is impressive) the rest of the team was fo...
Read full review

The slow, but dangerous tank

This is one of those players you will never expect to be good, and yes, he has some MAJOR downfalls but he has some great stats which, when used in the right way, may make him a unstoppable scoring machine.As he is a former AZ Alkmaar player, I was hoping to get him from my WL rewards and actually use him, which I did.I have played 131 games with him, he scored 79 goals, assisted 48 and most importantly: he wa...
Read full review
0
/600
Update my avatar Dos and don'ts
Top Rated
New
Controversial
Show comments