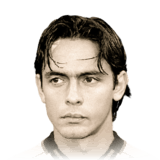 Inzaghi is absolutely lethal as a striker; I play him as a lone striker in a 4-2-3-1 (wide) with Pirlo (88) as CAM. Inzaghi delivers at least one goal per game, he's the perfect striker for Pirlos through balls. With a Hunter he is more than fast enough, the dribbling is quite good and he is always in the right spot. Feels much more aggressiv than the stats suggest.

Scores many goals with the left foot, I don't feel any difference.

After around 40 games, I sold him to get Halloween Ibra instead - and switched back after like 10 matches. Inzaghi feels much better and (for me) is much more efficient than Ibrahimovic.

So I am a big fan of the Milan icons, and when I saw the Pippo was 240k and not as bad as anticipated, I decided to give him a shot and use him beside David Villa in Division Rivals. Now I am no exceptional player, but I believe I wasnt too bad to use Pippo wisely. He scored in all games but two, but scored a hattrick once to compensate. Here I have to say that Vardy is probably better, but Pippo is both fun and insanely well positioned. Pippo will get you one goal and only one goal because of weird consistency. I quite liked him, but I believe that there are a lot better strikers, but nevertheless he is better than Vieri and Shearer in my opinion, Get him if u need an icon striker for under 300k, but dont use him as a striker if u dont need his links. His stats just dont back up his price.

After packing this meme in untradeable rivals rewards I was contemplating whether or not to use him just to test him, I obviously chose to use him over my 85 Zola who was tradeable. After the weekend league I knew that I had to write a review on him and here it is.

Inzaghi is the best striker I've used in the game.

He has been a incredibly clinical inside the box, but not so much outside with his 84 long shots feeling like 64 in my opinion.

He seems to have the hidden icon stat when the ball doesn't leave his feet until he wants it to.

Pippo's shot has way more than 86 (96 with a hunter) shot power as when the ball leaves his laces its flying into the back of the net.

finishing inside the box

all ways seems to find a way to score

he's a unworring player for the opponent until the game starts

3* skills not ideal but not card breaking

not the best passing