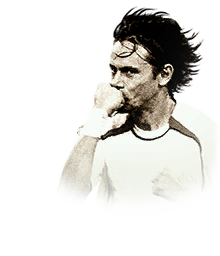 Now with a prime icon moments striker sitting at 400k you're naturally not going to be getting an absolute baller. And its no secret that Inzaghi is well just awful. Now dont get me wrong I love this guy in real life and thought he was an absolute bagsman in real life but EA clearly dont. Inzaghi must have had some fun with the CEO of EA's wife because what they have done this man's card and legacy is borderline criminal. They blessed him with a fantastic 82 pace. Pippo was no Mathis Bolly (legend <3) but 82 pace is an insult. And unfortunately it reflects in game very poorly and his always gets caught up by defenders even with a hunter. EA were kind enough to give him 97 shooting which naturally makes him lethal when in front of goal but its a chore getting him in the right positions and even then his 3 star weak foot makes his shooting a lot worse. His diribbling is nothing special. His 3 star skills dont help either. As for his passing its best I dont comment. And obviously his physical and defending is poor. EA have butchered one of the greats and I would love to write a review about how good he is but unfortunately hes just rubbish.

Everything else really. Face stats dont even look bad but they feel much worse.

Cheap for a moments card but expensive for what you get.

Prime icon moments Inzaghi, a player often forgotten about. I disagree with the other review saying that this card is not good as from what I’ve found, this is totally the opposite!

Firstly his shooting is by far the best on this game, with many ‘meta’ players that I’ve used such as IF Ben Yedder, Mbappe; I have found Inzaghi way more clinical

Although his pace let’s this card down this is easily fixed with a catalyst ( boosting it to 92 ), as his passing stats are not amazing, although this dosent matter too much as he’s a ST.

The cards top class shooting paired with his good dribbling makes him insane.

Things that may put people off buying this card:

People may be put off by is card, solely due to his pace, although with the 99 attack position, this isn’t really a problem (especially with a chem style) with a prime moments icon for 365k (snipe) being absurd this makes him insanely good value for money

Another thing that may put people of this card is his 77 stamina. I have not found this to be a problem at all and have not needed to sub him off in any games so far due to him getting tired.

3 star skill moves and 3 star weak foot may prove to be poor for some players, although because of Inzaghi’s 99 finishing and godly shooting stats, it feels much more like 4 star.

Great in 1 on 1 situations

Well, i packed this guy from the moments sbc, at first i coudn't stop laughing because of my horrendous luck, so i decided to give that card a try for fun in a 3 league hybrid and he shutted my mouth since the start.

Being honest, this card got some cons that would probably make it unusable to most players, but i don't mind since i usually don't move too much the ball using strikers as i let my midfielders and wingers do the job, and for what i wanted him to do, that was score as many goals as possible, he scored for me very brilliant goals, and i'm not exagerating when i say that half of them were outside the box.

He's not pacy or habile at all being honest, but when it's time to break nets or defenses, this guy destroys them how he wants, and also his passing is quite clean for my surprise.

Another thing to have in mind it's his value per money, he's cheap asf logically as he is probably the most hated icon, so if you are thinking to buy him and give him a try, don't doubt it at all, he's the most fun player i've used the entire year because of what he is for fifa community and how surprised i was with him.

Best shooting and attacking positioning of all game

More agility and balance than it says on the card

Good assister for being an ST

Not bad dribbling but average

Slow for this stage of game