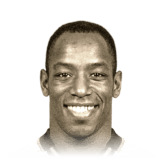 so being an arsenal fan and having 600k to improve my squad i went for Ian wrights mid icon and he did not disappoint, game changer. With a hunter he's quick on the break away and getting in behind, excellent finisher every time he's in the box its a goal no question, can score with both feet and his long shots are amazing better than the stat may suggest. He has good physicality when on the ball which is good for a striker, dribbling despite being low isn't that much of an issue. Hold up play is good when linking between another striker or CAM. His passing is average and can do the basic short pass but dont expect amazing through balls. Can usually go for whole 90 mins never had to sub him off. For me he has 78 goals in 64 games which is amazing. Work rates being M-M can be an issue sometimes but usaully makes the wright (right) runs, hence why he has soo many goals. Don't know why he so cheap!!

Ok, I know. Is not easy use 500.000 coins to buy a Mid Icon 87 at the start of the game but he is a LEGEND of Arsenal’s and I’m a Gunners fan! I tell... with Ian all sounds amazing. I was play 25 match in Division Rivals with him and end my 10 hours of EA Access. I was start by the 5th Division and I ‘have been playing 20 match’s with him and arriving at 4th division. All thanks to Ian!

Passing 6.5 on 10 (Ok, he doesn’t have a great long passing but in the middle of the area works fine)

Price (This card is so cheap to complete and is 100percent worth it.)

When I did the Mid-Icon-Pack I didn´t expect too much to be honest. When I saw this card, I was still disappointed. So for the first weeks I didn´t even sub him and didn´t think about it tbh. After some really f*cked up Games with other players I thougt, screw this I´m gonna try him. In the first match he scored 4 goals and assissted 3. I was shocked and thought, okay my opponent was not the best in defense so try him more often. Now, after 16 Matches he scored 17 and assited 10 goals. With his strong foot he doesn´t miss a single chance, I´m not lying. With his eak there were some but still, this guy is amazing and I didn´t think so at all in the first place. I can really recommend him to players who don´t have that big amount of coins. Price/Value is 11/10. Idk how it will be when you skill like a god because I don´t and how the 3* skills affect you. But I can tell if you look for a good shooter who is agile and always in the right spot to score 9 out of 10, go get him!! I play him with hawk btw and in Div 4 and Weekend League mostly between gold 3 and 1, so also against solid players.