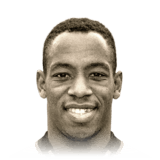 So Ian Wright, I have played him in striker in a 4231 infront of ozil, Maddison and zaha and he is just unbelievable he take runs that no one els would and he almost finishes all of his shots. but at first I didn't think he was that good but that changed now he scores about 3-4 goals per game. his passing isn't that good but I works. his dribbling is actually very good. a similar player is pot osimhen which I think is a very good player with similar stats. the player instructions that I use is stay central, get I n behind and stay offensive

med/med but that works

I picked Ian wright in the first icon swaps and it was one of the best decisions I have had in fifa 20. I was first gonna get rio Ferdinand but at the last second I switched to Ian wright. him with a hunter has been one of the best strikers in the game for me. he combines insane pace and insane shooting and it works perfectly for the meta of the game and the way that I play. some of the goals I have scored with him have been insane. he has also scored a lot of important goals that have won me ages

-only usable at striker

I opened this account just for writing this review. First of all, I used him with a Hunter Chem and as a Striker in several formations, 4-3-3(4), 4-3-1-2, 4-3-3 (3) and so on. Lastly, I have used him in 4-2-3-1 and gave the instructions; stay central, stay forward, conservative interception AND HE WAS AMAZING IN ALLLLL FORMATIONS, Formation doesn't differ for that guy, it doesn't matter he is alone or playing with a partner, he just doing one thing. HE IS SCORING.

Yes, as you can see from the stats his passing is a lil bit low, and yes you feel that in the game, he makes some mistakes, but mostly he gives the basic passes without problem. Actually he is not making assists that much at least for me he worked like that, I also played with depay(86), mallen(87), mbappe, son(88) all of them making more assists under my control. However, this guy dont need to pass or assist because he will compensate his mistakes by scoring 2 impossible goal.

Yes, as you can see his agility stats are a little bit low and balance also relatively low when you compare with the strikers who you used with quick dribbling, however he is not that much clunky, yes sometimes he feels clunky but sooo rarely. So If he doesn't be a little bit clunky this card would be around 700K or more maybe. But actually you dont need that much agility with this guy because with a quick step to his right, you can shoot directly, at that moment you will forget all the cons about that card because that shoot will be a certain goal.

His pace is enough not flying like mbappe but still its more than enough. Surprisingly I like his physical condition, he always plays 90 minutes and 120 and also cant get abused by any of the defenders. Nobody can bully this guy, nobody. If somebody try to bully Ian Wright he will take the ball to his right and score the banger.

CONSEQUENTLY AND MOST IMPORTANT THING, This guy will not change your teamplay or sometimes you can't see him for 60 minutes but somehow at the end of the game you will see that IAN WRIGHT is going to referee and taking the match ball since he did a hat-trick.

JUST BUY THIS GUY YOU WILL NOT REGRET.

Sometimes he feels clunky (can be a problem for some people who wants to dribble till the end of the game...)