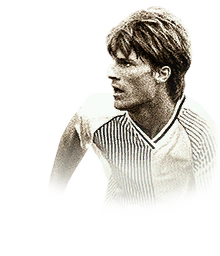 Okay, so to add some context - I am a regular Gold 1 to Elite 3 player, and regularly beat a lot of the esports players from Australian clubs. Have also finished top 100 in the ROW region quite a few times. I also love trying players that you don't see very often, and trying to work them out. I actually loved Prime Laudrup, so when this one came out - I was itching to try him.

I don't usually write reviews mainly because of the time it takes, but think he has done enough to warrant me sharing the joy of Laudrup. I'll break it down to the base stats. Note that I switched between a Deadeye and a Marksman on him too.

Not rapid, not slow - but certainly fast enough for the CAM role. Obviously, pace itself on him isn't going to save him from 90+ paced defenders, but if you have some dribbling ability - you'll be able to keep his body between your opponent and the ball very easily.

Okay so this is one of the areas where Laudrup really justifies his coin. He has amazing balance, often wins 50/50 balls against quality defenders and seems to autopilot to a position where he can keep the ball away from his defender. Turns well, and makes some sexy first touches too (backheels, flicks etc).

The second area where this man excels. Laudrup can pick a pass from anywhere, and any type of pass too. The best passing player I have used all year, and I think EA might've bugged him to be supremely good in this area (maybe to make up for his shooting injustice).

Not the greatest shooting CAM, by any stretch. But he does score some amazing goals, and his finesse shot is OP as anything. Often will chip the ball top corner slowly, it's really pretty to see and haven't seen any other player produce finesse shots like that, apart from Ronaldinho who I used in Drafts.

Wont barge anyone off the ball, but does put his body in the right position and often wins fouls too. Good enough, and I set him to stay forward to preserve his stamina.

Driven shots from outside the area

So, i am a div 5 player who’s is quite honestly not very good at the game. But I’m always looking to improve my team without spending too much money on the game. So I am always looking too get OP cards for no cost (icon swaps). For the last few seasons I have been grinding for Icon swaps every time doing Keane and Nesta for icon swaps 1 and Hernandez for icon swaps 2. This icon swaps I had the same idea planning on going for Bergkamp, but after watching many online reviews and contemplating wether he was worth the grind or not I decided to go for someone who was gonna take less time, Michael Laudrup.

And i am not regretting it I’ve played about 40 games with this card now and he is by far one of the best cards I’ve played with on FUT this year. With a combination of technical dribbling and his ability to glide past people he is a pleasure to play with and a player who will not take much time to convince you that he’s SERIOUSLY good.

With him averaging about 1.2 goals per game which is very good considering I’ve been playing him CAM, this is also surprising considering his sketchy shooting stats. But with the combination of the right chemistry style (in my opinion a sniper) and his traits, the finesse shot and outside of the foot shot this has not been a problem and in fact he has been finishing shots that I haven’t seen my 90 rated Luis Hernandez finish before.

About his passing and dribbling, his best stat is definitely his dribbling, he on the game is definitely the best dribbler I’ve played with, simply gliding passed people and then either making a 40 yard ping or finishing a chance. His passing is also great wether is be shot or long he has been spot on also making difficult passes with his heel etc.

But sadly there are a few downsides to this incredible card most obvious his physical stats including his stamina. With the only 65 physical he does have the knack of being “barged” of the ball By defenders this is why it is important to not overuse his dribbling stats and too offload he ball if there’s a chance on. His stamina stats can also some times be a problem with him either having to be subbed around 70th minute or having to have a boost in fitness before a squad fitness is due.

But considering all the +’s. of this card these stats are only minor issues making this an incredible card who is worth ALL 9 tokens, so for anyone looking for a CAM, CF, or ST this has to be an option to look at !!!

I am a gold 2 player, not so bad, not so good. When I got to 9 tokens, I chose Laudrup before the pack, beacuse i was afraid of packing someone like moore or vieri. I wasn't expecting nothing amazing from this player, I just wanted to have a good play making player, and he is perfect for the role.

Sprint speed, he makes very good runs, and if he is fighting the ball against bellerin or semedo, he will leave them behind, he can also outmuscle big fullbacks like hateboer.

Passing, this is a cheat code.

Finesse shot inside the box, those are secured goals

Finishing, with deadeye is on point

Finesse shots outside the box, not as good as inside

Acceleration, he is not s a speedy dribbler