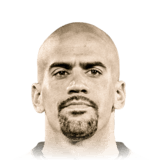 Right now he goes for 235,000 coins on PS4. That is a steal! I played with several icons this year and Veron is better than Essien for me. He is so calm, composed, powerful. He really bosses the midfield with his presence like you would expect from players far above this price range. You can feel his aggression stats which makes him fight for the badge. His passing is also more than good enough! The only thing he could be better at is dribling but when you buy him you already know what type of player he is.