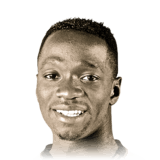 I will review him as a CM, not as a RM so be aware. I play him alongside Wijnaldum and initially thought I would get rid of him pretty quickly. But after one Weekend League I noticed that he is much better than his price (for an icon) suggests. His best asset is definitely the pace. You don't get 86 pace on a CM that easily. For example, I had the thought of saving coins by swapping him with Guardiola, but the 10 pace gap is too big. His dribbling is pretty decent and he can move quickly. His defending says 70 but I don't feel a difference to Wijnaldum (79 DEF). His passing felt alright, and his finishing is ok if you play him as a CM. Longshots are non-existent tho. Overall I really urge you to try him out!

So I was playing a starting formation of 4-3-3, and I needed a right winger to play CM (I presume that everyone knows you can swap player positions with custom tactics). When I saw an Icon at just above 200 k (PS4) with amazing pace, great dribbling, fine passing, mediocre defending and atrocious shooting, I knew I had to give him a try.

Also, he has the finesse trait. And if you combine that with his 64 shooting it will do absolutely nothing for you. Outside the box he couldn’t hit the broad side of a barn door even if his life depended on it.

But don’t give up on him just yet.

I put a Shadow on him, and he is super-fast. It’s like having a winger in the middle of the pitch, but not one of the weak ones like Dembele but a real midfielder, who can tackle, pass and dribble. He is a bit like Kante only larger in stature and better. I honestly think he plays better than Kante. He makes some great tackles, and with FIFA 20 gameplay being way more rewarding to tackling than FIFA 19, he is pretty enjoyable to play with.

The funny part is, that he scores quite a lot of goals. NOT from outside the box, of course. Remember the barn door thing… No, he makes a lot of good runs into the box and pops up for low crosses from the wing all the time.

Because of his pace he is just always there and with his clinical 67 finishing, he somehow always finds the net from inside the box. I am not kidding. From 45 games primarily as an RCM he has scored 11 goals and made 15 assists. I think that is somewhat amazing for a midfielder, who also plays a lot as a CDM and has stats that indicate, that he should not be allowed in the box.

For the meager prize of 240 k which he is at right now, and being French for the Ben Yedder link, I really think he is worth it.

He is just one of those cards whose stats don’t really paint the right picture.

I haven’t noticed his weak foot. He finishes equally fine in the box with both feet and equally horrific from outside the box. I don’t skill that often besides ball roll and heel-to-heel, so all good from here.

If you need one word to describe him: Dynamic.