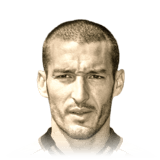 I packed this guy out of the prime icon pack from icon swaps a few weeks ago. At first I wasn't overly amazed but after using him for a few games I fell in love with his card. If you are that guy who sends their fullbacks forwards and has them as an attacking option this guy is for you, he has everything you can dream of in an attacking RB. I've put stay back instructions for him as I'm playing the 4231, but when he does get forward he makes a massive diffrence.

And for chemistry styles I would recommend an anchor, I'm only using a shadow because I accidently applied it on him while looking for an anchor

5* weakfoot, can play on either side of the pitch

Nothing major apart from the price