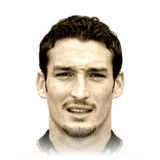 Zambrotta is a classy right back. I played him in a 4-2-2-2 which is the perfect formation for him. Imo he is the best right back in the game without doubt. Zambrotta is very good at defendning and is crazy fast. He is a bit too offensiv sometimes, but that is not a big problem. BUT! when he is offensive, he is not actually that bad at attacking. He's got decent dribling and passing, which is very important in this game.

BTW. He has 5*Weak foot and 4*Skills. That means that he can both play RB and LB.

Meanwhile doing icon swaps, I was planing to get Raul or Seedorf. But when I saw this card my mind completely changed, and therefore I decided to go for him instead. I was wondering if it was worth it, because he was (only) a right back. But after playing about 50 games with him in WL and Rivals, I didn¨t regret anything. Earlier i used Semedo, but Zambrotta is clearly a number of levels higher, even though I still liked Semedo. Zambrotta has all the things you need as a right back. He fast, good at dribbling, passing and the most important his defending and physicality. He can easily push wingers and strikers away, and also good at competing with fast wingers in pace. Zambrotta is also good at dribbling, which are a problem for some backs. The only bad thing about him is his shooting, but it doesn¨t matter to me, because he is not in my attack anyways. I can therefore clearly recommend you to get Zambrotta in icon swaps, or maybe buy him on the transfermarket, if you don¨t want to do the boring icon swaps.

Shooting (But he is a defender, so it doesn´t matter to me anyways)