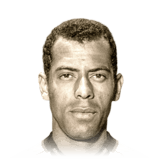 After completing the third and final Icon Swaps 3, I decided to go for the Prime Icon Pack as I wanted to try my luck. When I saw the Brazilian flag, I thought I had hit the jackpot but then I saw RB and my hopes quickly vanished but all was not lost as I was quite happy with getting Carlos Alberto and I had wanted to try him for a very long time and getting his Prime Card wasn't the end of the world considering his Moments card was up for grabs in Icon Swaps 3. He instantly took the RB position which was taken by Kyle Walker at the time. After that, Kyle Walker never saw the RB position again.

Pace: 90 PACE on a RB is quite good considering how fast wingers can be on this game and he catches up to pretty much all of them which is exactly what you want. I can't say the same for the attacking side of things. For some odd reason, he couldn't outpace other fullbacks which was frustrating at times but when he did get past, there was no catching up.

Passing: 81 PASSING feels about right on this card. His 87 VISION made sure every time he cleared the ball, it magically fell to one of his teammates and not the opponent or out of bounds. His 86 CROSSING helped with crosses but the 66 CURVE made a lot of those crosses very direct at a certain player and not unpredictable like many other players.

Dribbling: 86 DRIBBLING is a massive understatement. The 84 AGILITY on this card feels more like 94 and his 90 REACTIONS was spot on for me. He was always able to get the ball back from a winger that was trying to cut into the box and he never had a problem passing the ball to one of his teammates. I am not joking when I say, Carlos Alberto never lost the ball from a heavy touch once. Why? Because he never had a heavy touch. The ball was always close to his feet and that 84/94 AGILITY really helped with that.

Defending: Should be 92 at least. 90 INTERCEPTIONS means he somehow gets the ball when he shouldn't and his 91 STANDING TACKLE really helped with those 1v1 contests. Now I am one of those players who knows when to slide tackle at the right time and if you can master that, his 90 SLIDE TACKLE will really show as the attacker is not able to get the ball after he performs a slide tackle as he wraps his legs around the ball and is back up and running with the ball at his feet in no time. I can't really describe how his heading accuracy was because headers don't work in FIFA 20 but he did manage to score 3 goals from headers and as a RB, I'm OK with that.

Physical: 84 JUMPING feels like 89 JUMPING. He managed to get the ball out of the opponents box from a cross or a corner about 99% of the time. His 90 STAMINA means he is lasting the full 90 minutes and 120 if it goes to extra time. 89 STRENGTH is about right. When he catches up to an attacker, his success rate of getting the ball back was around 66% which sounds bad but considering how hard that actually is, it's quite good when it's 2 out of 3 times he is getting the ball back.

FINALE: At the time of this writing, Carlos Alberto is sitting at around 460,000 coins which is quite a lot of coins considering you can get Summer Heat Semedo for playing the game but if you want a quality RB who will get the job done for you up and down the pitch, Carlos Alberto is your man.

Can only put Shooting as I used him more as a defensive full back rather than an attacking one.