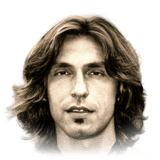 What a player. I started by playing him as CDM, thinking he would be like IRL, just standing on the halfway line and distributing passes left and right. But no defensive chem style could save his defensive abilities, so I moved him up to CAM. What a magnificent CAM he is. It's like he's programmed to being unable to misplace a pass. Every single one reaches its goal, and often its precise as well. I slapped a finisher on him to boost his long shots and shot power, and with that curve he finishes finesses almost every time. With 92 positioning he is also always there in the box to finish a move that he initially set up. If you don't need the pace in players this is the best CAM in the game for me so far, better than my previous IF KDB or Politano. He also dribbles like a god and can turn around with ease, the balance is no problem. For 400k this is a steal, unless you need pace, he will do the job but won't outpace many defenders, just let him be the one to do the passes instead of recieving them.

so I don't write many reviews for players because a player really needs to stand out for me to write about them. so I bought Pirlo after struggling to find a centre midfielder that could deal with Fifa 20 awkward and inconsistent passing. Pirlo solved this issue for me. his passing is outstanding, id go as far as to say better than any layer of used on any Fifa and thats among toty de Bruyne, prime moments Scholes and so on. he can play pin point first time passes with the most insane curve on, and they are perfectly weighted. his crossing is also absurd, I really struggle to score from crosses this year but im scoring one every 2 or so games. his pace is not really an issue played at cm or cam but it totally depends on your play style because he's no the fastest. his dribbling plus the 5 star skills helps him keep the ball even when under pressure, and this makes him feel a lot stronger in game. id say for the 740k I paid for him, some of the passes he can play blew my mind and made that price tag more than worth it. he plays alongside sissoko mahrez and de Bruyne in a 41212 narrow and he outclasses all of them. his free kicks and long shots are very good too and 4 star weak foot is an added bonus too, if youre a passing player and looking for a player that can do it all for you, pull the trigger and buy 90 Pirlo

Passing - the best in the game ive tried so far.

Dribbling - fast turns, quicker than you'd think on the ball, and smooth skiller

pace? - it doesn't bother me because mid 70's isn't too slow, and slap a hunter or something on him will really boost it, but I don't really think he needs it

strength - he will get bullied by your sissoko's, pogba's etc