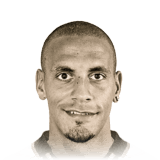 As the new ICON Swap challenges hit the FIFA scene on Monday, it became a race to de-rank as quickly as possible for many FUT Managers; attempting to remove some of the stress associated with the “interesting” requirements.  FUTBIN posed the question; who does everyone wanted to see reviewed before making your final choices with your hard-earned swaps?  Rio Ferdinand was an overwhelming selection and with that, I threw the English powerhouse into my backline this past Weekend League.  Alongside Van Dijk I applied the ANCHOR chemistry style to Rio in hopes that the dynamic duo would shut the doors on my WL opponents in the following squad: 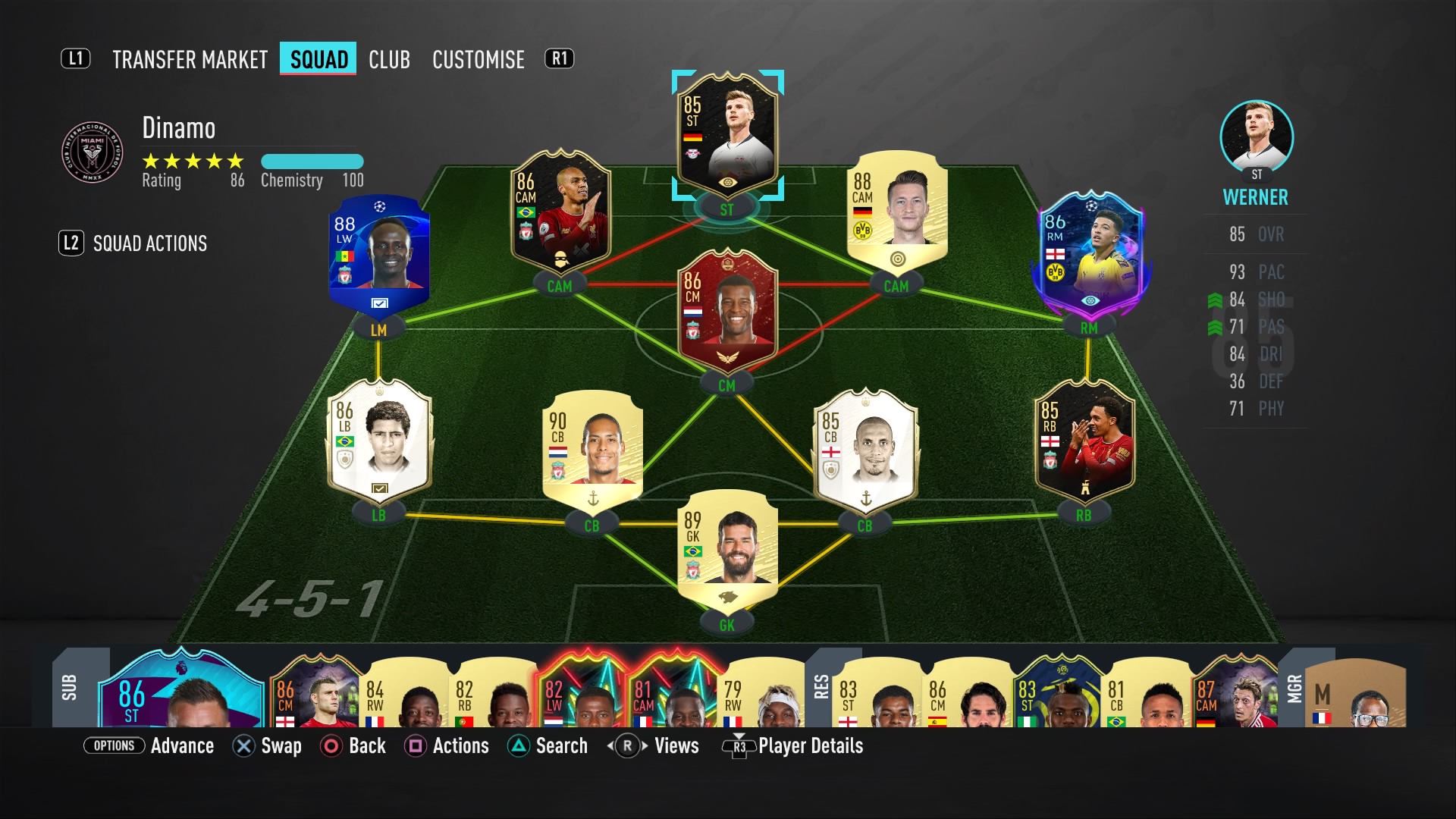 Not quite a full 9/10 in my books, which might be “harsh”, “unrealistic”, “stupid”… but I stand by the fact that Van Dijk outperformed Rio throughout the weekend and I did not notice a huge difference between Rio and other CBs I have used lately.  When I add up the comments I made in my notes throughout the weekend they all come from a place of disappointment that Rio did not live up to my expectations.  This might be the biggest issue and one that FUT Managers might face when completing this SWAP.  I expected a savior who would improve my squad and push the quality of my squad further forward; what I got was an extremely solid option who created stability, but not superiority.

The ICON links are incredibly useful and if you packed yourself a red IF Walker this weekend you have a pairing that will last you for a long period of time.  The link to IF Trent Alexander-Arnold or RTTF Joe Gomez is also nice for those hybrid options.  When I say I long period of time I mean it in every sense of the idea and not only is Rio a 5/5 in strength now, but he will be well into January in my mind.

88 ACCELERATION & 90 SPRINT SPEED; two numbers that would be ideal for your top-level strikers in FIFA 20 … also the result of applying the ANCHOR chemistry style to this beast. 88 INTERCEPTIONS is also the lowest of the defending statistics that Rio carries and demonstrates the level that his defending can reach.

Explain the ratings here is quite simple; value for coins I think that Rio is a 4/5 and 700k is just too pricey for me.  When Van Dijk is sitting at just under 600k and superior in every way you cannot say that spending the coins here is good value.  There are other options for a cheaper price that allow you to spread the wealth in other areas of your squad.  However, value for time is a different story and receives a 5/5 rating for me.  The fact that this card is essentially “free” is a crazy concept.  Yes, I know that free is an interesting and debatable word here … but essentially he is zero coins.  Is it time-consuming and frustrating, absolutely! But so worth it when you see your hard work pay off and submit the hard earned cards to earn your just rewards.

So, here is where I am going to try and justify the 8.7/10 that many readers will probably take issue with.  I can hear/read the replies already about Rio being a stonewall 10/10 and the best CB of all time.  But I can only relay what I witnessed.  Undoubtedly Rio is class and can run a backline, but three key areas I found time and time again were the following: lost headers, weaker tackles, poor passing.  The lost headers is a bit of the game makes up but Rio did lose considerably more than VVD on the other side.  The tackles are again part of the game, but often Rio would go into players and not emerge with the ball, leading to additional chances.  Finally, the passing is just not the best and he would make excellent interceptions, followed by giving back position with a ball I would normally expect to find the target.  Everything else is pure class, but the same issues began to weigh on me during the 20 matches.

To complete, or not to complete, that is the question.  One that we all must answer as swaps begin to wrap up and decisions about the squad need to be made.  After all is said and done and if you still have all of your swaps there are really only four options in my mind. Rio (of course he is still top shelf), Base Icon Pack (roll the dice and hope for a sick pull), Butragueño (this FIFA was made for him), and my pick … Zanetti.  I will not go into why I would go the Argentine’s route, but I will say that if Rio is the man on your mind you will do well to complete the Englishman.  There were some tackles he made throughout the weekend that I cannot deny, VVD would never have got there… but it is the fact he needed to make them that bothered me so often.  Cheers for reading. 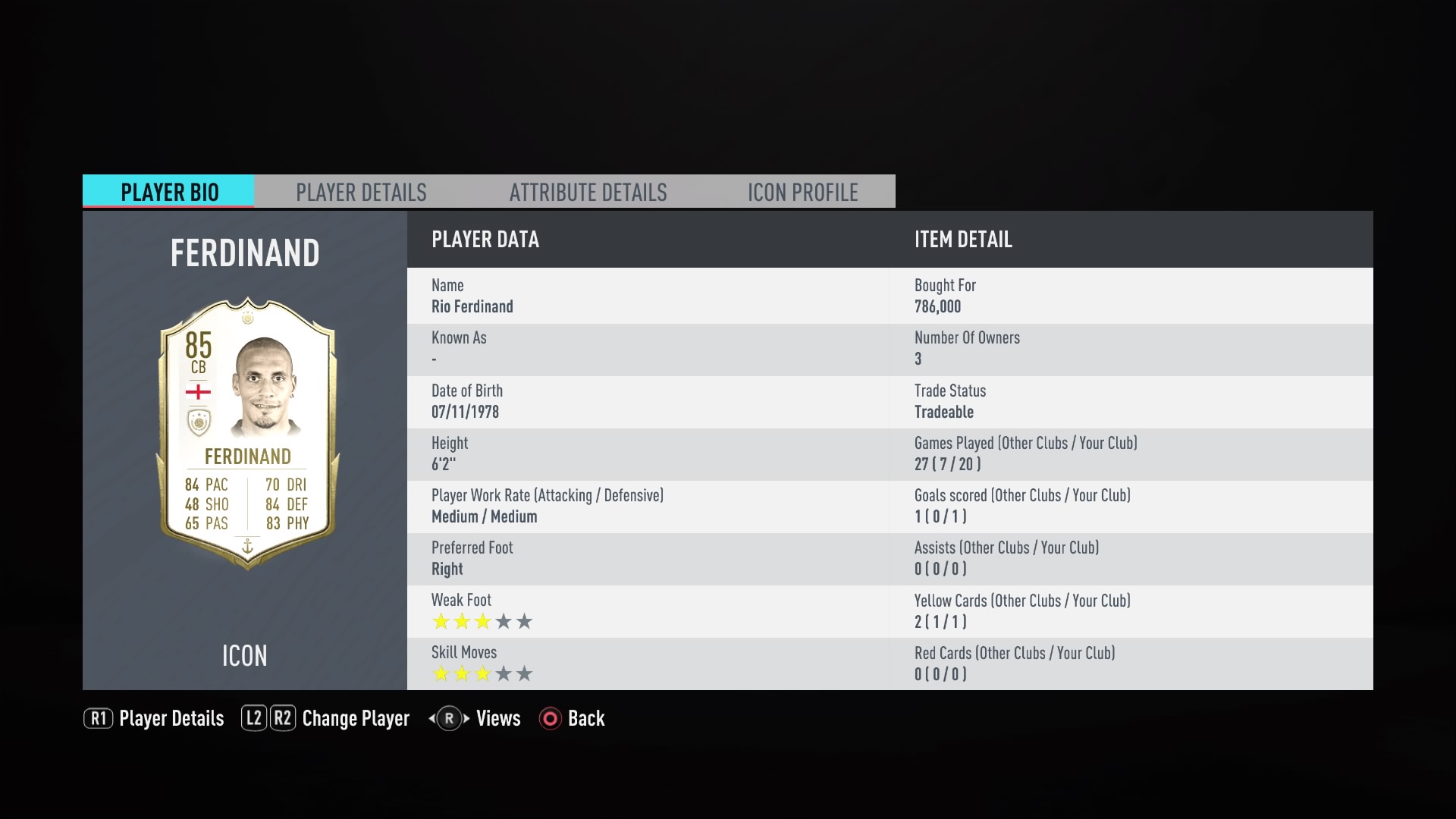 I played fifa 19 last year and i faced a few times Rio, he was maybe the best CB I faced right after VVD toty and tots, Ramos toty and Varane toty, so when the set of icons for the first swap was reveled i thought i should give Rio a try, as his baby version is better than his middle version. Fifa keeps on being a game where pace really matters, it matters so much that even Hummels, Boateng, and great CB with low pace are unusable at a good level of skill rating, because you have to face players like dembele, sancho, gnabry, coman, werner, crespo, walcott, mbappe, neymar, so when you see Rio card there is an appealing 84 pace on the card. You then need to see if this card has agility and balance cause a lot of pace low agility and balance equals to no pace at all in many players but he has 60 agility and 60 balance for a guy that is 6´2 (189cm) thats quite high. Cb as Sule or Varane or Scream Pique they all have very low balance, im not saying that scream Pique or Varane are bad im just saying that balance is a very important stat convined with pace as we can see on that 81 gold card that Eder Militao has that is awsome and very cheap. I chose to use a Shadow on him, i know maybe some of you are thinking that is an abuse but really its not. The thing is that with a shadow he has 98 acceleration with 95 sprint speed, he is just a player that can recover and get almost any attacker in this game. All in all Huge guy, really quick, top tier CB, good agility and balance, wins aerial balls (only goal I scored so far with him comeing from a corner), and will not let you down just trust me, totally worth the grind for this God

He is a rock (189cm) and he will anticipate and outrun almost any attacker in this game, his pace is just phenomenal and with his 85 strenght and 84 agression it just turns him in to a very quick tank. I use shadow on him but you can also use an anchor and he will be really good too (I recommend a shadow cause there is no physical need with this card). Then you just have to enjoy this card and don´t let pace abusers win anymore. This card for me is and almost end game CB, at least until Tots i dont think there is a better CB in this game (of course toty will be better but this is almost like a free card) he is up there with VVD, but virgil lacks a bit of pace in my opinion, with a few upgrades well he is VVD he can do whatever he likes hahaha. All in all i pair him with Eder Militao and Ter Stegen as a keeper and I think they are the most overpowered Trio in the game.

Ferdinand the Tank is one of the best central backs ive played so far, i used Van Dijk, Joe Gomez 83, Koulibaly and much more... but in this Weekendleague after many many hours of grinding for him.. he was my gamechanger.. his pace is so good and with the sentinal combination he's also a fricking tanky dude, if u did the joe gomez sbc (83 rated road to the final) u must do the ferdinand sbc (icon swaps) i swear this is a deadly lifetime duo.

hard to steal the ball

positioning is on point

I picked up 85 Ferdinand in Icon Swaps 1 because I genuinely thought he was the best value for your time and and he was only 14 tokens. I have no regrets and he is my most played player in my club. The man is a genuine tank and bullies anyone off the ball with ease. Despite the pace, he is actually quite fast and catches up to lots of attackers (apart from Kent, Adama Traore, Daniel James).

Pace: 84 Pace may sound quite bad for a defender but slap a SHADOW on this guy and his pace shoots all the way up to 96. With 98 ACCELERATION and 95 SPRINT SPEED, this English god will catch up to any attacker that your opponent throws your way (apart from Kent, Adama Traore, Daniel James).

Passing: 65 PASSING for a centre back can be quite concerning for some people but if you put a BACKBONE on Ferdinand, his passing upgrades to 73 which isn't the best but it's way better than 65. You do get 88 SHORT PASSING and 82 LONG PASSING with this upgrade but that doesn't hide the fact that he still has 62 VISION with the upgrade of a BACKBONE.

Dribbling: 70 DRIBBLING is okay in my onion for defenders but if you don't like the 60 AGILITY and the 60 BALANCE, then you can put a GUARDIAN on him which fortunately upgrades his AGILITY to 70 but unfortunately, doesn't upgrade his balance at all.

Defending: Before I continue, DO NOT LET THE 84 DEFENDING PUT YOU OFF BUYING THIS CARD! Put a GUARDIAN on Ferdinand and his defending shoots up to 96. With 99 DEF. AWARENESS, 96 STANDING TACKLE AND 98 SLIDING TACKLE, Rio Ferdinand is a force to be reckoned with. The man is an absolute beast and he strikes fear in any opponent.

Physical: 83 PHYSICAL is quite good for a centre back but if you don't like that, then a SENTINEL should do the trick which boosts up to 90. With 92 JUMPING and 93 HEADING ACCURACY, you "MIGHT" be able to score a header with his height being 6'2". The SENTINEL Chemistry Style also boosts the defensive stats to 95.

Overall: If you picked up 85 Rio Ferdinand during Icon Swaps 1, you picked up a bargain. If you didn't, this card will set you back 900,000 which is quite expensive but is worth every coin.