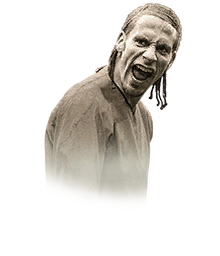 played him in weekend league along with Ramos league SBC card, and he was very impressive. He felt stiff but his defending was insane and his composure really came into play when making clutch tackles. However, sometimes he stumbled/staggered when making a collision with a stronger attacker such as Benzema.

Hidden Clutch Trait - always made up for his mistakes

Agility and Balance - not great

Dribbling - don't dribble with him

My back line was missing a final piece in form of a really solid CB. Someone to work next to Joe Gomez and Trent. At first, I have to admit that I was a bit worried about the agility. With the new additions in this years TOTS, there has been popping up some really well-rounded CB's with green numbers all over the board, and Rio is clearly lacking when it comes to both passing and agility. I've always been used to having really agile CB's (like Tomori) so I was afraid that he wouldn't fit my game style. After a few games I could relax again. Rio is an absolute bully, very similar to VVD in his presence on the field. Really strong, and pretty much always at the right place and the right time. I'd say that he's one of the best CB's out there with this type of build, the only ones that I can think of that rivals him is TOTY/TOTS VVD, Maldini and in some situations Ramos and FB Militao. All in all, a really great card.

Physical presence on the pitch