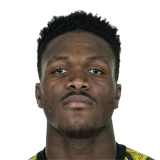 0
Red
Upcoming Matches
P. Chemistry
Squad chemistry
ST
53
RW
50
LW
50
CF
52
RF
52
LF
52
CAM
53
CM
61
RM
55
LM
55
CDM
73
CB
78
LB
71
LWB
68
RB
71
RWB
68
Reset
Basic
Sniper
Finisher
Deadeye
Marksman
Hawk
Artist
Architect
Powerhouse
Maestro
Engine
Sentinel
Guardian
Gladiator
Backbone
Anchor
Hunter
Catalyst
Shadow
Comments
Reviews
0
/600
Update my avatar Dos and don'ts
Top Rated
New
Controversial
Show comments
Top Reviews
Only logged in users can submit a review
A review must be written in English
At least 200 characters are required.
Compare this player to other similar players you have used(optional).
If you import your club to FUTBIN or send us an image with the player data(fill the form below) your review will be marked as verified.
Include what you liked about the player in the pros area and what you disliked about the player in the cons area.
Your review will be manually checked during the next 24 hours.
Chem Style Used
Formations
Position
Rate Player Base Stats (1-10)
Pace
5
Shooting
5
Passing
5
Dribbling
5
Defending
5
Physicality
5
Most Used In:
Submit Review

5.0
Jumbo by Night but my Mom calls me Dan
366 users liked this review

Hey guys so basically my life has become a complete lie for 16 and a half years. This year, I have not met a human, nor a virtual player. I met an immortal God. Dan-Axel "Jumbo Shrimp" Zagadou is the best centre back in all of FIFA 20. I have played 59 games with Dan and he has carried my measly team to Elite 3 every single weekend. I have also played 1 game with Dan-Axel "Jumbo Shrimp" Zagadou at striker, and he managed to easily bag 1 goal in an acrobatic fashion. Orgasmic. Other than that Dan is the most solid defender on my team and you can always depend on a big tackle, or shove, or complete penalty being brushed aside by the referee who is way too scared to question Dan. Dan has made me go out into the FIFA community and find some followers of the Lord himself, and it has brought me to this here page. I have gathered some of the loyalest followers of the Jumbo Shrimp and now I have arrived to form an army. This game will be played on the back of only Dan and Dan himself. Goals will only be scored with Dan because only Dan is strong enough to beat Dan. This will cause an uproar within the hierarchy of EA and they will be forced to rename the latest edition of FIFA to "Dan the Almighty. 20". Dan will defeat the wretched input delay, the drop back abusers, and will become an ICON within the game. Our plan is to then develop this rise of a new God into the real world, where Dan will be pronounced King, and we become his loyal shrimps. This is the plan my fellow FUTBINers, do not disappoint Dan. By the way, his name isn't the only thing that's a JUMBO SHRIMP, if you know what I mean... ;)

Quick poem for the boys.

-Dan is helped me get through my dog's death

-Can't have two of him in the same team.

-Cannot play both centre back and striker simultaneously.

-Cannot marry my mom (or dad, if you're into that).