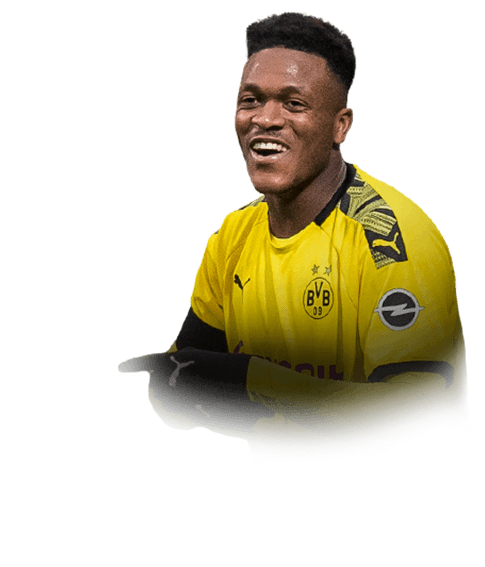 the team very nicely paired with league sbc lainer, rttf konate and winter refresh schulz at the back

my red reus and potm werner.

His pace can be fixed with a shadow, which also boosts his defending up to 92 with 99 slide tackle. Orgasmic.

Although his stats suggest otherwise, he is suprisingly good at free kicks. He has curled 4 set pieces into the top bins since signing

and has singlehandedly carried me from low div 6 to div 4.

His agility and balance are not an issue, as when he sees a child under the age of 10 in the yellow wall he grows a third leg

Zagadou has coped well when i played against the likes of headliners auba, prime eusebio and Sif mbappe, just like he kept

him quiet in the first leg against Psg

With 95 strength and 6ft5 he does not need to jump for a header, especially with headers not being meta this year.

Stamina does not matter as he plays cb and if he gets tired he will simply abuse his 95 strength and 99 slide tackles. And

probably the kids in his basement.

When you get a corner he is the dangerman. Get the ball anywhere near the french youth prospects noggin and it is most likely a goal

Ea must have not seen his goal at the weekend as they only gave him 27 volleys but in game he can still bang them in.

Last but not least with his exceptional 84 composure he will stay calm during a fire.

Sorry @Sirpengu i may have copied some of your review but hopefully the SQA dont find out.