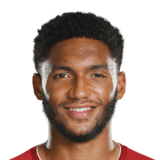 Coming here to write a review for Joe, I was expecting nothing but appraisal. Oddly enough, some players have made bad experiences with him. I cannot aggree. He was playing in my team that is worth 2 million coins. Not because I didnt have any left for a decent CB, but because he convinced me in my starter squad in Fifa 20. And his performance was on level with his partner in defense: Lenglet. I played Joe as a right CB.

Nothing else really necessary for a CB to criticize here.

In the beggining I thought that he as normal but when I gave him the anchor chemestry style, he becames a beast, his pace is amazing, his defending too, his only con is the jumping, however, he is preety high and when with anchor, his jumping is normal, I recommend everyone to try using this player because he is the cheap van dijk

-Pace: his pace is amazing for a center back

-defending: his defending is awesome for ne players in fifa 20

-Jumping: his jump isn´t good but a good chemestry style can solve this issue

-passing:his pass is mediocre but I don´t think that it is a big problem

-Dribbling: he don´t have a good dribbling, however, you can also use his strenght to don´t loose the ball

He is legit one of the most solid under 100k CB I've used in Fifa so far. I use a Sentinel on this card, but IMO anything would work on this guy. He's an absolute unit in defense and is a must-have if you are someone like me who doesn't like spending on defenders. I've used this guy for like 200+ games, and the only time I had problems with him is when I play like a drunk. When I play like a sober man, he is second to only Virgil in the Prem. Then the only thing that I see as a negative is when you need to go for aerial duels. He sort of derps out and doesn't jump or go for the ball. If you want to be a bit efficient on coins, but still want a solid Weekend League backline, I suggest complimenting him with Mendy (Roberto Carlos if you have him like I do) Militao, and Wan Bi and Boom you're ready for the weekend

I had high hopes for him cause he had 81 pace, but that seems to be the only thing he is good at.

For a cheap CB option he will probably do you good with the 81 Pace, but he will let you down with 79 strenght and 73 aggression. He also felt clumsy on the ball and his passing was dreadful.

Wished me and him got along better, but that was not the case with me unfortunately.

Hopes he will be better for you.

I was quite excited to use this card this year. The combination of height, pace and decent defensive stats made Joe Gomez look like a great CB for a decent starter squad, especially with a sentinel chem style. A poor man's Van Dijk I imagined. I was amazed to find out he only cost about 5k during EA access. I expected him to cost a bit closer to 10k at launch so in my mind, I thought I was getting a sure bargain of a CB that would be in my squad for quite a few weeks but oh boy was I wrong. Now with defending even harder this year, I wasn't expecting miracles from Joe here. I was just expecting someone solid enough to make the easy interceptions and blocks, while also pulling off the occasional tackle I managed to time right. But this was rarely ever the case. Joe was utterly useless in my defence. He never won headers as you really notice that low jumping, never made blocks and missed the easiest tackles and interceptions, even the ones I was pretty sure I had timed perfectly. He was out of position a lot and never got close to his man off the ball, resulting in many free chances for my opponents. His play on the ball was also lazy and lethargic, maybe because of the 79 reactions and lack of agility and balance, I don't know. He was constantly outshone individually by what eventually became my very solid CB pairing of Lindelof and Bailly. The difference was even much clearer when I played him alongside my loan VVD to compare the 2. It's important to note your experiences might be different from mine, because I have played against Joe Gomez a lot already and he has been immense for some of my opponents, even though I've been able to exploit his known weaknesses most times I've faced him. I wouldn't recommend this card (except of course because it'd be good for me if most people had him so I could score some easy goals).

And oh before I forget, defending