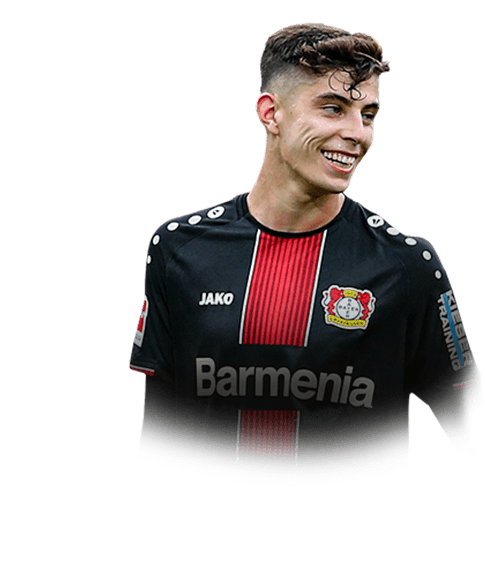 Well TOTW3 was … forgettable, but there was one player that did interest me given his dominance in FIFA 19.  King Kai Havertz was a standout card for me last year and I was curious to see if the new game dynamics would suit the Bundesliga big man.  Havertz led the line in a 4-3-3(4) formation and was joined alongside Marco Reus in a 4-2-2-2 formation throughout the weekend.  In a game where pace has been a key asset, it was nice to see that different styles of players can still be utilized … but with varying results.  King Kai was the danger man in the following squad throughout the first Weekend League: 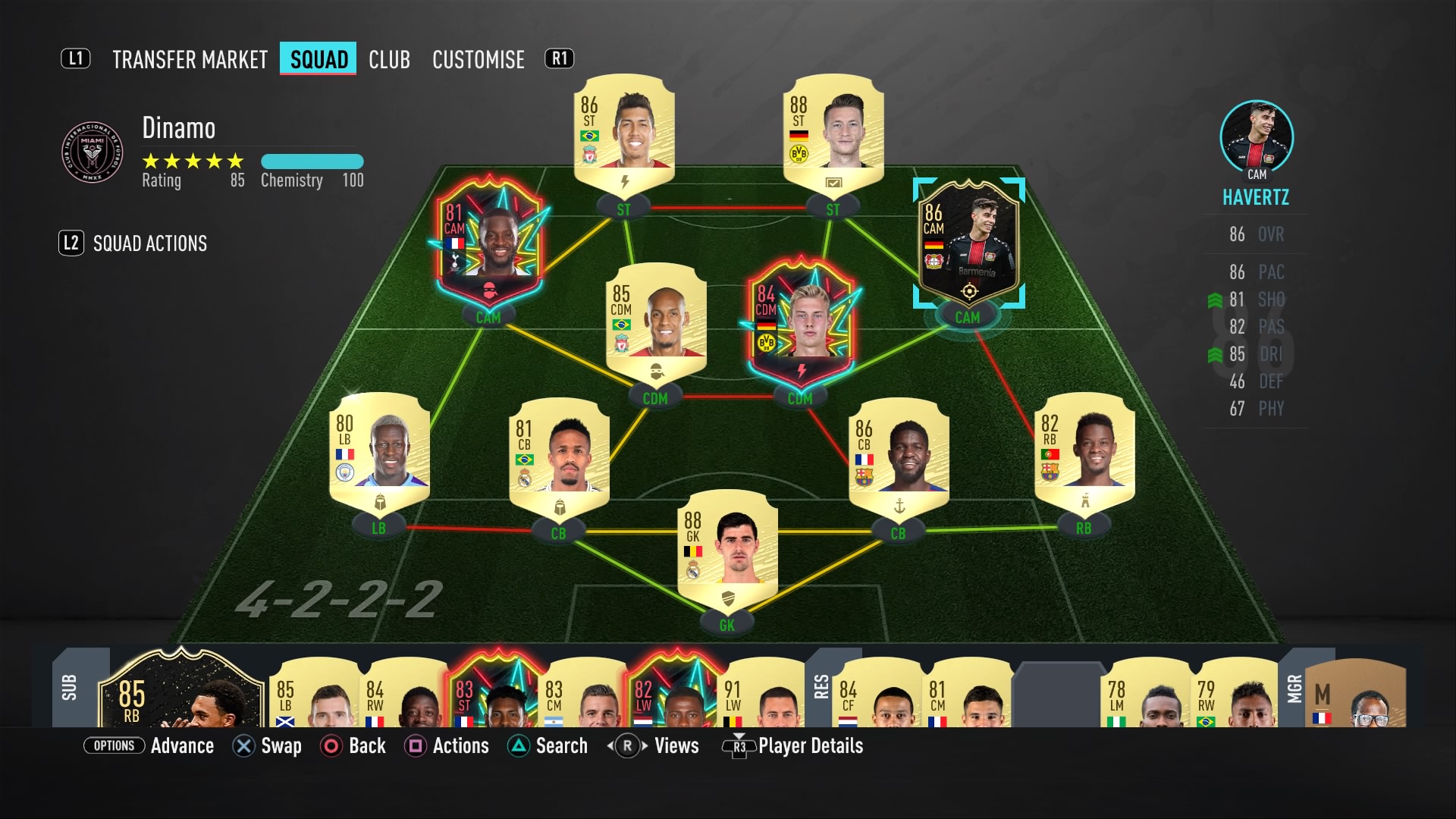 Overall this card was a quality addition to my squad and having a physical presence in the ST position paid off.  One odd comment would be that I honestly felt Havertz benefitted from the slow pace that Weekend League offered this time around.  Since the weekend I have used Havertz in Division Rivals matches and I have found that his pace (or lack thereof) is way more noticeable when the gameplay is fast and responsive.  The SNIPER chemistry style seemed to translate into tight and agile turning and was beneficial when trying to open up space for attempts at goal, and ultimately the key stat is the amazing finishing that this card possesses when on the left side.  The 4 STAR WEAK FOOT was not at the same quality as I have experienced with other players this FIFA (Lacazette for one), while the 4 STAR SKILLS are a nice addition to a well-rounded card.

Quality league, good nation, and easily altered position allow you some freedom with this card.  I still felt trapped in choosing German Bundesliga options for my links, which is not a downfall given the selection of cards but does leave you feeling limited.

I have read/watched examples of FUT Managers with 50-100+ games already logged in with this beast who swear by him. Others can’t get on with King Kai and are already condemning him to the pile of afterthoughts.  I felt like this card has a very purposeful place in any squad looking for some attacking strength.  The actual 67 STRENGTH statistics seems very low given the 6’2 frame and on-screen size when you get on the pitch.  I found defenders couldn’t get around Havertz once you found position, and allows you to focus on finishing your chances.

At just under 2.0 goals/assists per game, it does feel a bit harsh not to go straight to the 5/5 rating here.  However, I just feel like 174k (PS4) for this card is just a touch too high; a noticeable comparable is Nicolas Pepe who is in the 6’0 (183cm)+, 85+ Pace, 80+ Shooting category and is just 70k (146k for the OTW).  But don’t get me wrong, I did not feel like I had wasted coins in purchasing Havertz and he does provide a massive focal point for kick-starting the attack.

I just want to touch on the passing portion of the review in this section.  I realize that the passing rating you see on a card is not a direct average of the different statistics that appear.  But it is worth noting that the two lowest passing statistics for Havertz are his FK Accuracy and his Crossing.  Two categories that have zero importance when playing Havertz as your ST, or even at CAM.  His passing was excellent in a weekend where a lot of passes were off target and that is saying something.  The real negative with this card is again a lack of pace which really nullified Havertz as a CAM for me.  I like a CAM who can drive with the ball and can run beyond my attackers when necessary and that just isn’t this card.  Here is a case where if you don’t need pace at the CAM position…  are looking for a strong, quality passing, and capable of finishing CAM… then my bad opinion is your jackpot.

After looking at Lacazette and Firmino in my previous review it was easy to compare Havertz against the two EPL options throughout the weekend.  Statistics wise Havertz compared to the goals and assists return, but I just feel he falls a step behind in terms of overall quality.  As I have mentioned I do feel like Havertz thrived in the sluggish quality that we faced during Weekend League, and I wonder if Lacazette would have been able to hold up the play without the ability to burst away from defenders?  I would normally sell the players after reviews to make way for new additions, but I might even keep Havertz on the bench this weekend given the success he demonstrated when the gameplay is slow (sad that this is a reality, but is our reality for now).  In the end, King Kai did rule the first Weekend League, and you can’t go wrong with the Leverkusen giant at the front of your attack.  Cheers for reading. 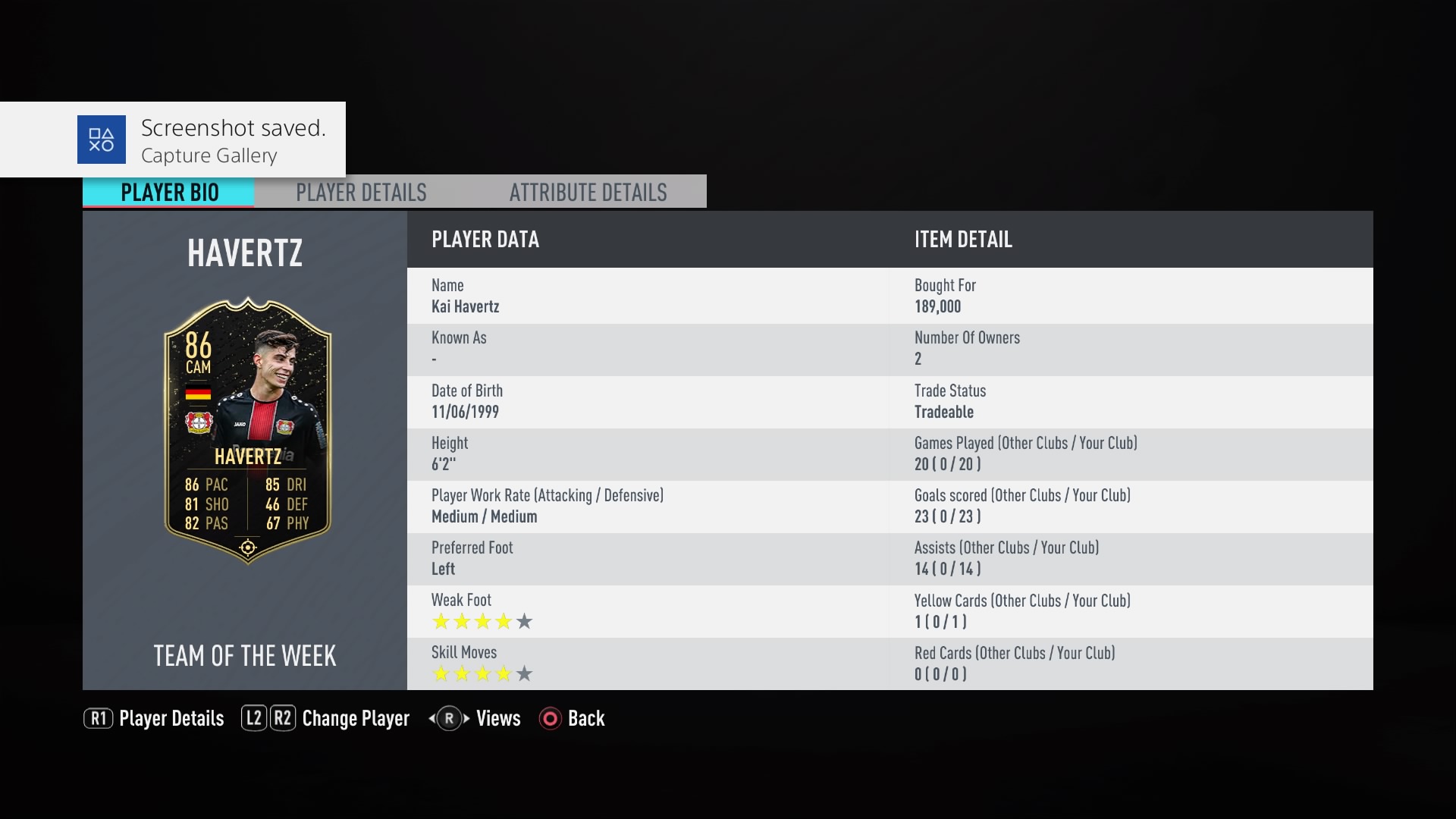 Where to start with this guy, what a player in real life and this inform card is even better. He is the most well rounded player I've used thus far in FUT20. Sitting in the CAM spot in a 41212 with Mertens and Werner in front of him, this guy pulls the strings every single game for fun. Whether its CONSISTENTLY scoring finesse shots in or around the box, or threading delicate ground and chipped through balls into the strikers, this guy is the whole package.

SPRINT SPEED: quite fast off the mark, however once he gets into stride NO CB IN THE GAME can keep up with him. incredible sprint speed.

PASSING: extremely consistent and accurate passing, all types of passes.

DRIBBLING: silky dribbling and very cushioned ball control, always seems to have control over it, even after an R1 pass.

SHOOTING: great shooting I would say, however his finesse shots are BROKEN, and I mean that in a good way, you will score 8 out of 10 attempts just outside the box.

HEIGHT: won several headers whether it be from goal kicks or just open play.

4 STAR SKILLS AND WEAK FOOT: very reliable weak foot and obviously nice to have the skill moves too.

STAMINA: lasts all game long without slowing down.

AGILITY AND BALANCE: the only drawback to this otherwise phenomenal card. can feel clunky at times and can be slow to turn.

STRENGTH: gets muscled off the ball every now and then by the really strong cbs in the game.

First off, I was lucky to pack this beast in a gold upgrade. From the moment I packed him, I haven't ever dropped him at all. Although his return isn't the best for me. There are 2 things I have to keep in mind, first that he plays in a CAM position, and second that I use him to start off an attack more than I use him to create the end product. He just gets you the goals at the right time and the assists, he gives a perfect pass for the goal and has a brilliant shot, the only downside is his free kicks and his long shots, BUT those can be boosted with a chemstyle if you were to pick the right one. I cannot remember the amount of times he has given that killer pass or taken that exquisite shot late in the game and won for my team. Also, the 4 star weakfoot honestly feels like the 5 star weakfoot he had last year.

Shooting (all except for free kicks and long shots)

Physical (he could do with a but more strength)

Havertz did fit last years meta perfectly. This FIFA he is still great, but doesnt fit the game as well as before. The price at 175k seems fair because of many superb links inside and outside the Bundesliga. Sadly his 5 star weakfoot is gone - still a threat in the box.