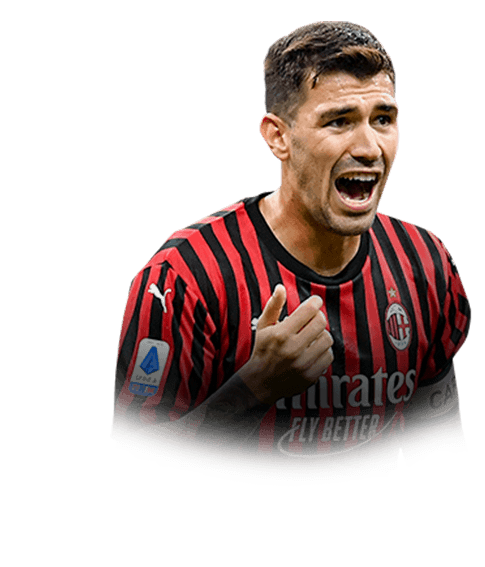 I'm always really interested in the Serie A. Everyone tends to go for a BPL or La Liga team, and I like to mix things up a bit.

After I used a starter Eredivisie-squad for a while, I decided to go with Koulibaly in my first Serie A squad, but it was clear that he lacks a lot of pace. So I needed a new centerback.

When the scream-cards came out, I immediately fell in love with Romagnoli.

His pace upgrade compared with Koulibaly is massive. Together with Manolas, 81 and 82 pace, you have plenty of speed in the back.

Romagnoli also excels in passing, something that's really usefull if you want to build up an attack slowely.

Over all, really solid card, definitely worth the price.

So being a Milan fan, when I saw this card come out I immediately needed to get it. When I did, I was so happy. 86 is an ruse, mans plays like hes a 93 (which w a sentinel his in game stats make him that rating). His pace is amazing and paired with Chiellini, not much gets by them. This guy does not miss a single tackle if you know how to properly jockey, just press the tackle button and the ball is yours. his passing out of the back is so good and I never panic with him. If you don't have this guy, you need to buy him. IL MIO CAPITANO!!!!!

So after trying out so many different centerbacks on the game, I always come back to using Romagnoli. He is hands down the best CB I played this fifa and I played the likes of VVD, Varane, Lenglet, Baby Cannavaro, RTTF Diego Carlos, RTTF Juan Jesus (he is better than the normal Militao, I haven´t tried the RTTF though). His partner in my team is Juan Jesus RTTF and he outshines him in every aspect of the game.

Pace - rapid, does not get overrun at all.

Passing - insane, short passing, long passing, you just know he is going to get the pass perfectly accurate.

Dribbling - Isn´t the most agile player, but he doesn´t need to be with his pace and his defensive positioning. I don´t have any problem with his "low" composure.

Defending - hands down the best defender for me. He is always at the right place at the right time. He flies into tackles and barely ever loses a 50/50 situation or lets the ball bounce back to the attacker. I can´t remember him doing any big mistake in over 200 games I played him. Just unreal.

Physics - strong, very agressive, pushes off any attacker with ease.

Just buy him, make sure you have an anchor chem style on him, and enjoy. If you struggle to link him think about Zambrotta from swaps or put inform Donnaruma in goal, he is very good aswell.