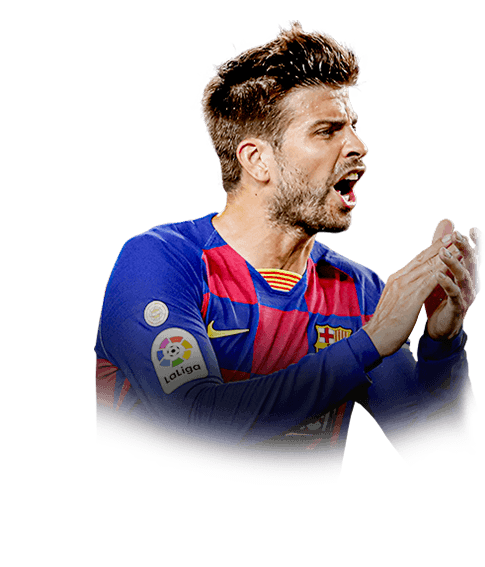 So today I was as usual waiting for 6pm content release and when it finally came I was for sure not disappointed. With I think 5 or more new sbc’s (including marquee matchups) I was really pumped for doing them and opening all the packs. But when I saw this card. oh man. I’ve used pique in previous fifas and he was actually pretty good but the pace always lacked. But now when the gave him this beastly scream card with FINALLY good pace I thought I tried him out. As I already had lenglet in my team it was really a no brainer since pique was tbh an upgrade AND cheaper.

So to much of that now how his performance is. Since I could not get a hold of a shadow I temporarily slapped on a catalyst to boost the pace even more. As you might know he is as tall as VVD so ofc he was a bit of a tank. He was almost exactly like him too, he got the same autoblocks the same insane stand tacklings and the legendary slide tackle clutches and he was fast. I’d say he is almost like VVD in every way. And since they also boosted his dribbling (most of all ball control and reactions) nobody could take him of the ball. And with that 89 strength on a 6’4” nobody is winning a duel either. But there's always some problems with a player, for example his agression is not as high as you would have wanted it, don’t get me wrong he still goes hard in in the tackles but some times with VVD you get those super fast challenges that he always wins the ball with, not as much with pique. BUT what I think is if you wanna buy a player like Van Dijk or Van Dijk I’d recommend buying this card instead, he cost 400k-600k less depending on console and he is as good as him. If you already have a bpl team? Try out ter stegen in goal, him as right cb, semedo as rb, sissoko/kante/pogba as cm and Ousmane Dembele as RW. I think that’s better than any Premier League right side!

Jumping (like doesn't matter but it is pretty low)

Hello and welcome to my third review of this Fifa and this review is about the Scream Pique. I'm not a massive fan of Pique in real life, but when I saw his card, I said I wanted him in my team. So that's why I did this SBC and he costs me around 80k (I had not much of high rated players). I put a Catalyst on his card just because I needed that pace boost and I couldn't snipe a Shadow.

Let's begin with his cons shall we... His acceleration is an issue just because of the game. Every gamers plays with at least two players with 90 pace and because of his acceleration is 61 (71 with Catalyst), you can pass Pique with the speed on short distance. Another thing it is his agility. I love to have a CB with good agility to go forward with the ball and pass the players easily with some little dribbles. You feel that 66-67 agility and 44 balance that Pique has and that for me annoyed me. Probably not you, but for me, it is a con. Finally, the work rates. High/Medium when we know we should keep the CB always on defense, it is another issue. But that's it for the cons, because he has a lot of pros.

The pros, why I really did it it is the reaction and the composure. Not only the agility matters, the reaction and composure really matters, because when you do a command with Pique, he will do him automatically with that 98 reaction and 99 composure. It is crucial to have this on your RB/CB/LB because of the pace and the dribbling that comes with it. Also, the height is a positive point. 6'4'', it is not everyone that have this height. He can win the ball pretty easily, we all know that. The acceleration was a problem, but the sprint speed is a good point, because if a player is on a breakaway opportunity, with a Catalyst, Pique could come back on defense if it is a long distance. All the defensive points are very good, he did not miss a big tackle that needs to be done and wins practically every 1v1 opportunity, like a VVD. I did not attempt a long throw with him, so I did not took in considered the passing ability, but surely he can makes good throw balls. Last positive point it is the price. It is difficult to say if there's a SBC with a player that is a good value, because EA maked them overpriced, but this Pique is a 90 rated for 120k from scratch with good packs, you can use him, he plays for a big team, big nationality, ... it is a very good SBC imo.

That's it for me, I hope you enjoyed it, if you have any questions, you can dm me on Twitter on @MRLouis_Charles.