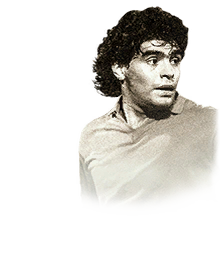 Maradona Prime Moment in your team

People scared about the card when you play with him

He can score with his hand if you play against English teams...

i packed this guy out of a one rare players pack i thought wtf is that even possible but then i decided i would bench my baby cruyf maybe sell cruyf if maradona had it in him and he omg he was amazing(on one foot) his left foot is amazing his dribbling is amazing as long a you shoot with his left then its garaunteed dub.

doesnt have a right foot