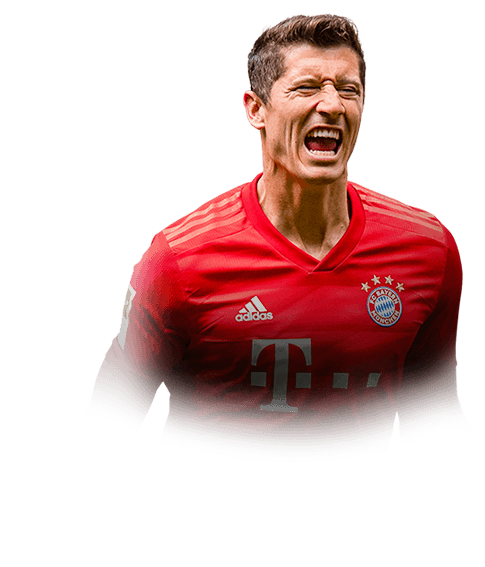 Here I am once again, reviewing another striker. So I packed this badboy out of a playerpickpack and have played around 30 games with him.

With an Engine, his pace is boosted to 90 and I have to say, I'd like him to be a tad faster. I like to let my striker/wingers go behind the defensive line a lot, but with Lewandowski it's always a bigger risk. Sometimes he makes it, but with the amount of fast defenders out there it may be a wise idea to put a Catalyst on him, but I think that's your call and depends on your playstyle.

Next up: Shooting. Boy oh boy can this man shoot. Any angle, outside or inside the box, volleys... Doesn't matter, ball goes in the back of the net, it's that simple. I have seen him score some goals in ways I haven't seen before. His traits make all of this even better. Pure class.

Passing. I boosted his passing and it's really noticeable how good it is. He can give through balls and what not, without any difficulties. I haven't tried it out, but I think you may even be able to use him as a 10.

Dribbling. He doesn't feel clunky at all. Very responsive and he's able to get out of very tight situations. Ball seems to stick to his feet, so left-joystick-dribbling is definitely not a problem.

To finish things of we got Physicality. His high jumping and heading stats give you the opportunity to cross the ball to him and hit the f*cker in the back of the net. 83 Stamina is fine, he lasts all game. He has 90 strength, so he'll keep off practically every defender.

To close this off, I want to point out he's really versatile. You can use him in any way you want. I would highly recommend this card, so if you got the coins, buy him.

After getting this guy as one of my red player picks for WL, he went straight into my 3-5-2 starting 11 for the WL. Put an engine on him giving him insane allround stats and hoping he was the missing link to push me into Elite 3!

Didn't take long for me to find out Lewandowski, who's vastly underrated in FIFA, is a decent card but definitely not what you expect from a 94 overall rated card. Due to his posture he feels slow, clumsy and his dribbling is most certainly not what his card tells it to be. Such a shame that such a good-looking card is not anything close within the game. Had some hope that his strength would compensate for the lack of speed, but loses most of the 50/50's with decent CB's he gets into.When he gets close to the goal and has space he scores, but he (and me!) has a lot of trouble with creating that space. His headers are absolutely unreal, but that's something that is of no use in this edition of FIFA. Really like this guy and his performances in real life, a shame EA made such a good card useless thanks to the game engine.

Finishing - he scores goals when he gets the space to shoot from inside the box.

Heading - very, very good, scored 3 or 4 crazy headers in his first WL for me, probably more than any player has ever done for my club.

Speed - Too slow, the stats in his card must be lying.

Power - You expect more from this, given the numbers on his card.

Dribbling - There are a lot of better options available.