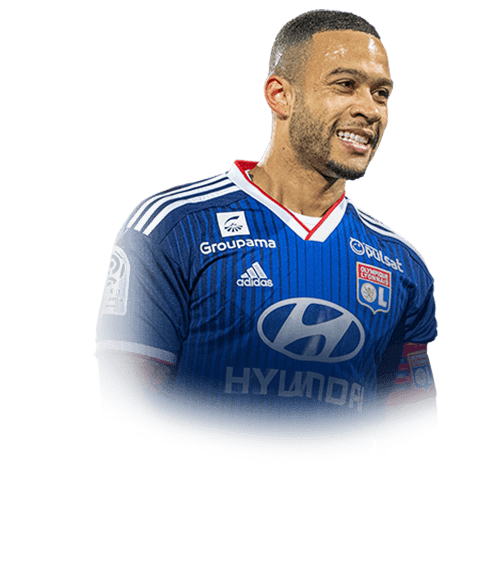 Memphis Depay's TOTS card is rated 94, he is 176cm | 5'9" tall, right-footed Netherlands striker (CF) that plays for Olympique Lyonnais in Ligue 1 Conforama with High/Low work rates. His average user review rating is 4.5 out of 5 . He has 3-star weak foot and 5-star skill moves, giving him the ability to perform every skill move in the game. He does have a real face in-game. Memphis Depay has 4 special cards with ratings between 84 and 94. He was born on 13-02-1994 and he is now 28 years old.

His real-life stats are currently 1 goals and 1 assists in 2 matches in domestic competition. He also received 0 yellow cards and 0 red cards.

To start off I'm a big fan of Memphis Depay, I love to see him play in real life, specially when he does that Neymar type of shit on the pitch. He likes to play with the opponents.

Now more into the FIFA world. Depay is the type of guy that floats around the defence because he just can. He looks like he just came out of prison, he really be looking buff. I think that's the reason most of his opponents don't even try stealing the ball of him.

Depay plays ST in a 4231, he gets the help of Payet, Messi and Aouar. (If this review gets good feedback I will be writing one for the new Aouar card).

I mostly play through balls to my LAM and RAM so they can pass back at Aouar and he then dribbles to the right point to give the ball to Depay so the Lion can kick that shit in the top bins.

What I really like about him was the composure when hee's standing in the box. He be chilling with Virgil and Ramos before he does some Hocus-Pocus turn and kicks it in the net.

He feels like neymar on the ball, but wayyyy tronger. Depay fights off opponents like we all did a few months ago to get some TP.

The most fun part about playing with Depay is celebrating after you scored. He be running to the side and putting his fingers in his ears. He not hearing the haters aka shushers.

I am writing all this in my studybreak, so sorry for any faults or lack in style of writing/creativity.

Last night I immediately bought him for 680k (xbox) together with Aouar (idk how much anymore). And I really loved playing with both of them so that's why I wrote this review.

Thanks for reading and have a nice day!

Pace: Not the fastest, but his pace combined with his skills and dribbling he feels like a hot knife cutting through butter.

Shooting: In my opinion he should of got a 4* WF upgrade, but Di Maria got it in his place. If Memphis is on his right foot the ball will go in 9 times in 10. Only thing I saw a a problem was my lack of scoring in 1 v 1's. Sometimes he just kicks it against the GK like he doesn't even care to score.

Passing: Absolute Iniesta type of guy, he will bend his passes around the Milkyway just to reach Payet or Messi so they can finish it.

Physicality: He looks like a guy you see at you local gym, buff guy. He will not be easily get off the ball, except when Virgil asks him nicely in Dutch: "Opkanker en hier die bal!".

Lil bit the same as above, but now the bad stuff about it.

Pace: he is quick, but not kent running past you in the 90th minute quick.

Depay is a very fast and strong player. The longe range shots a very nice.The price is also very low

I packed him from the guaranteed Ligue 1 pack and was very happy, I made a team around him with many player that only have 3* WF which isnt ideal. He plays striker or CAM for me in a 4231. His pace was very good but not anything amazing and didn't live up to his 96 SS and 96 AC. His shooting is amazing and definitely accurate to the stats. His dribbling is very ggod but he feels a little bit clunky because of his stocky body type. His passing was very good especially as a striker and his physicality was fantastic. I don't use skills so that aspect if him isn't very useful.