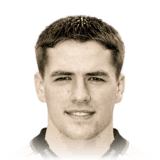 I was looking for a striker that costs around 90-110k. I bought this 88 Owen for 105k, slapped a Hawk Chem. style on him and wow, this card, for an 88 rated, is absolutely worth every coin. He feels amazing on the ball because of his dribbling and ball control. When he is inside the box, he know how to hit the back of the goal, from every angle. I also scored a few headers against defenders like totssf Manolas, Van Dijk and so on...

I used Hawk on him, because I had it in my club, and I'm not thinking about changing it. It gives him top tier pace, amazing shooting and boosts his strength and jumping. I really think that the pace boost makes a really big difference on him, since he is not the strongest, but as soon as he gets the ball, he is just so good at turning around and accelerating away from the opponent.

I am currently using Owen as a lone striker in a 4231, and I didn't change his instructions, their just on the basic ones. He is doing an amazing job and he is scoring almost every single game. Together with totssf Rashford (LAM), totssf Visca (RAM) and prime icon Rui Costa (CAM), I am allowed to put really high pressure on my opponents their defence and midfield. Behind Costa I am currently playing with regular Kanté and the 88 Flashback Allan, they keep it locked. My 3 CAM's are creating spaces and making moves, in the end, Owen gets the ball in or around the box, and he just bangs them in.

I would say that if you have are in need of a striker, try him! He is amazing, and I think that every player had around 100k in this period.