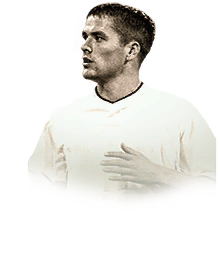 This version of Owen is one of the best strikers, I ve ever played in Fifa history. He is fast and agile, his shots inside the box are awesome. In his first 4 games he scored 16 goals in Div 6. He is a very reliable striker, but he is not good in combination. Very good Finesse shots

I've tried van basten moments, I've tried Drogba 91, but moments owen is another level all together. His combination of speed along with agility and 10/10 shooting in the box makes him nearly undefendable. Would highly recommend playing him either s a sole striker or in a partnership. 12 goals in 4 matches in rivals div 5

Unbelievable, If you can get him into position.

His finishing is absolutely outstanding, hold up play is decent, not too strong as to be expected.

His movement is the Only thing to let him down.