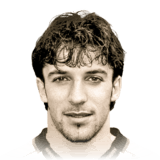 Finally it's time for my second review. Today it's about ADP10, who shot me this weekend league to Elite.

Mostly I played him together with GOAT Messi as a striker, while Mbappe and Neymar played on the wings in 4-4-2 or 4-2-2-2 (see Squad-URL).

With the purchase of ADP10 I could finally get rid of my handicap untrade OTW Griezman, who didn't fit into my system either as a striker or on the wings with his 3*WF and too low speed. Since I decided to let Mbappe play on the wing with Deadeye and get a striker with 5*WF, the choice fell relatively quickly on ADP10, because I also have an emotional connection with him (RIP Germany World Cup 2006).

After a few rival matches to play with ADP10, I started directly into the WL and dominated the first games without any problems. ADP10 was not completely innocent because he didn't miss any chances and scored the goals. It was a simple procedure: Pass to ADP10 at the penalty area line, use Drag-Bags and L1-Dribbling to find the gap and finish with either his left or right foot. Playing him with Hunter, he is also the man for the conter-attacks.

He feels as fast and agile as Messi (with Hunter). He also has an excellent passing, making unnecessary miss passes in the attack a thing of the past. With 88 stamina, he still runs in full sprint from the middle line to the penalty area even in extra time.

But every player also has his disadvantages, like ADP10. First of all, his low strength causes him to be pushed relatively easily by the ball. In addition he has only 72 balance, which also affects his duel behaviour. Stumblers and other dropouts are to be expected after duels with opposing defenders. Therefore you have to play around his weaknesses by using his excellent dribbling and playing around the defenders.

The biggest advantage of ADP10, however, remains his finishing. While I've failed the last weekend leagues too often at Ter-Stegen, ADP10 is the weapon against him. Even if Ter-Stegen often touches the ball, he can't defend it and the ball always lands in the goal.

To conclude the review, a comparison is made between him and Son/Ben Yedder, who have similar stats. ADP10 has the better work rates with high/medium, more stamina and the icon bonus that makes it easy to link into the team. Son and Ben Yedder are absolute meta-players and accordingly strong, but ADP10 is even better. If you have the money left, consider buying ADP10 and trying him out. The next icon alternatives with 5*WF would be Dalglish and R9, which would be even more expensive.

I hope you enjoyed the review.

I really don't know where I'd been if I hadn't pulled Del Piero from my icon pack. I opened two Base Icons that day, got Puyol, not very happy about that (He is actually good at CB though) and then I decided to open another one. Italy, CF, Fucking Del Piero. I used him at striker for hundreds of games but now I've started putting him at Attacking Midfielder since I've bought Messi. I figured Messi would work better at Striker with Stay Forward instructions because of his stamina. Messi is sensational at Striker along with RB Aguero but I still feel as though Del Piero doesn't get involved enough. He doesn't score nearly as many goals anymore for that reason.

Having him at striker means I could fire off more shots with him and let me tell you, that's what you wanna do with him. It says in his stats he's right footed with a 5* Weak Foot. These are lies. The truth is that Del Piero he... I don't know. I don't think he gives a fuck which foot he shoots with. Inside the box, left foot, right foot, power or finesse, doesn't matter, don't care. And outside the box...

I have a friend that I play friendlies with all the time and every time Alex gets it outside the box you can see the desperation in his players movement. Desperate to close him down, cause he knows. He knows very well from experience what happens if you don't. He could be talking about something and suddenly Alex gets it outside the area. Silence. He shuts up out of pure focus. Finesse shots outside the box, friendlies, Squad Battles, WL or Rivals, he's dangerous, very dangerous. And I don't even time my shots. Again his weak foot is insane! To the point where I seriously would rather shoot with his left than his right. Those left foot shots aren't just accurate but powerful too, unlike any other player with 5* WF. I've tried Socrates, KDB, Nedved and Son, but they can't shoot like Del. No chance.

I used Del Piero with many different Chem styles, but right now I actually use Maestro. I like to play short and quick passes while attacking and don't rely on sheer pace in my strikers. For this reason I don't use hawk or engine or anything that bumps up his pace. Instead I focus on his passing and especially his shooting. All his shooting stats get increased to 90+ with Maestro. I don't really notice his low balance all that often so I wouldn't be too worried about it.

When it comes to dribbbling I don't really have a clear opinion. I'm not a tryhard dribbler outside the box who uses Traore to run down the wing to cut back. He has 4* Skills and I like him with the ball at his feet so I suppose he's good.

I personally would have taken Del Piero any day of the week for my swaps based on my experience of using him, but it all comes down to how you play. I love using Del Piero, I think he's alot of fun to use so I wouldn't hesitate taking him for my swaps. Then again I have his 87 card which has better work rates than 90 so who knows.

Pace, he can feel slow at times even though he has 88 pace (Without Chem Style). If you rely heavily on your strikers pace I would use him at CAM instead.

This is my first review...my english is terrible, but I must do it.I played him in a classic 4-2-3-1 formation as a st. He is simply AMAZING. I was not sure of buying this card because of the price (750k for a 87 card is very expensive for me) but I can easily say this is the best st I ever tryied. Before him had very good st like Ben Yedder 87 ecc... but i'm a huge Juventus fan and Pinturicchio's charm was too strong. The best part of this card is shooting, it's so BROKEN, he can score from every angle with his huge shoot power. His dribbling is great, the 72 balance isn't a problem (I use him with Hunter, so no chem style boost ), he feels so agile on the ball and he is quite fast on turn and score. I'm a normal gold 2 player and for two years I tried to reach this f*cking gold 1... and finally thanks to this old man I can achieved it. I'm in division 3 and olso in rivals game he is amazing... I know his card stats are not so great for 700K and there are so many ''better'' options but this card is broken... more than every Ben Yedder, Son and anyone of this a*shole that 90% of players use. If u are a Juventus or Del Piero fan and can afford him try this card...thanks me later.... AHHH COME GIOCA DEL PIERO.....