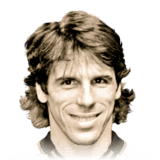 Honestly one of the best-attacking midfielders I've used since 90 Son in FIFA 17. He is so slippery when attacking, defenders converge on him but they just can't take the ball off him, even just walking around with the ball at his feet he breaks defenders' ankles. His shooting is very good, rarely missed a shot and rarely didn't score even from positions where I wouldn't normally feel comfortable shooting from. Finesse shots are his forte, very comparable to Mbappe in that sense, can easily score from inside or outside the box with a side-footed shot, two and a half bars power and its into the top corner. Similarly, low driven finesse is very effective inside the box. Power shots are equally good from most positions, scored a few good volleys on the edge of the box in Weekend League. His free kicks are truly masterful, the kind of player you can't help but smile when he scores.

-Stamina: its good but if you end up in extra time he will start to run out

-Strength: no suprise here if you sprint into Ramos you will be shoved off the ball

-Composure: I did not notice this in game, but it is lower than ideal at 75 so it's worth noting

All in all a very solid player. I mostly played him as RAM in 4-2-3-1. Also tried him as ST. I think he is best as RS, while playing with 2 strikers. With this card you have very many options, because he his very good overall player in all attacking postions. I liked him most in the right attacking lane thanks to his amazing outside foot shots.