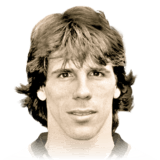 Packed him from the untradable pack and oh boy, I was never more happy then right now.

The way he move with the ball is something different than others. He's dribbling is just insane, in combination with his pace and his deadly shoting this card is nuts.

I've tried him as a CAM and it's defintely the best position for this guy, just put a deadeye on him and you will not regret it at all.

Before I packed him I've used the 89 Hagi, and there is no doubt this little fella is way better than him, he does match perfectly for the reality of fifa this year, his height is not a problem at all.

PACE: 10/10 There is not much to say about his pace, it's just perfect. He will run between the oponent defenders like he's a formula 1 car and with the deadeye it's more like nasa spaceship.

SHOOTING 9/10 When he's in the penalty box you can just press the shooting button and he will do the rest. He's finese shoots for me is even better while you are outside from the penalty box, this guy is 4/4 week foot, but I dont feel the different with his left foot at all is more like 5/5. You can even try his long shoots and you will not regret it at all, it's just impossible how good an 85 card can be.

PASSING 8/10 For sure it's not Zidane or Pirlo, and his long passing is not the greatest, but if you're trying to make some quick pass while attacking with your striker or midfilder there nothing you need to worry about. 82 passing is definetly enought to use him as a CAM.

DRIBBLING 10/10 If I'm gonna say he's incredible it's still gonna be not enought to describe this machine. His ball control, dribbling, agility and balance is just too good. He can just dribble around whole pitch and still be able to go trought the opponent deffenders like a small humming-bird.

DEFENDING & PHYSICAL 6/10 Lets be real no one will care about his def or phys. He's smaller than Messi so you cant expect from him to play like a Sissoko or Kante. He will lose every header, but again who's gonna care if no one is using them in game.

Now I used Zola as a CAM and also as a ST and the words cannot describe how broken this card is. I picked him up for 670k and sold him for 978k due to everyone realising how good this Zola is. Now looking at his in game stats you can see that he has the META stats for example 92 agility, 92 balance, 93 dribbling. This is what makes Zola so good in this game he fits the FIFA 20 meta which is small nimble players. I have used Maradona and a review will be coming out on him but this zola yes doesn’t fell as rapid and quick but for the 1Mil+ price difference just as good. He as good pace stats obviously and with a Dead eye which I used on him become one of the most lethal finishers I have used in this game the guy simply does not miss the goal.

?Overall, Zola is a top tier icon in my opinion is amazing quick and clinical. He gets a 9/10 due to the fact that he could be better in the strength category but if you’re on the line as to whether or not to buy him do yourself a favour and purchase one of the marker now you won’t regrate it .

Now onto more Pros for this card.

·     Passing unbelievable 85 short and 82 long as a CAM or CF when you use a dead eye high 90’s he will be the link up play player that you need in your team.

·     Positioning is also very good on this card with having a High/Medium work rates which are perfect. He is always making those dipping runs which you expect your players to be doing. Always pressing the defender’s lines and causing an issue for you opponent.

·     Shooting this card has his own rules. Finesse shots the only player in this game that his finesse shots go in 99% of the time. It’s legit a joke a cheat code more like it when it comes to his shooting. Finesse it and it will go in no matter who their GK is there’s only one result and that is the ball hitting the back off the net.

·     Dribbling is also a 9/10 so amazing. For me the best dribbler in this game is Maradona he is something else this Zola card is not as good however, compared to a lot of other players his much better his up there with Messi 100% and his stats back up this statement.

Now onto more Cons for this card.

This card is almost perfect but his strength and physicality do let him done sometimes. He is small and he is weak. However, you’re not buying a Zola thinking he will be strong. His balance helps with not being as week and he does keep his feet and due to the icon cheese the ball does stick with him through challenges so this helps the con of strength. So overall strength really isn’t that much of an issue.