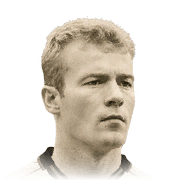 Alan Shearer does not miss. Matter of fact he can not miss. If he gets the ball anywhere near the box just shoot cause 10/10 times its in the back of the net. People hate on his weak foot (which should honestly be at least 4 stars) however in game shooting with his left isn't the issue, its the passing. His passing off his right side is mediocre he can make any short pass he wants, however it gets tricky. Medium distance I find to have issues with getting the pass through, however for some EA reason he's pretty decent with playing long balls and is actually quite good with it. On his left side stick to passing only to complete open players. Side note his free kick accuracy with out chem styles is an 86 but plays closer to the 92-94 range with the power free kick trait. Getting into dribbling, this is by far his weakest quality, however from previous fifa titles his clunkiness is not as noticeable which is a huge advantage on the break. I recommend shielding the ball with his body when you can't move pas the center back. His physicality is off the charts, he can head anything in over pretty much anyone. Stamina is not an issue as well. His 5 star international rep actually does him justice and helps him play so much better then the face stats of his card.

Left side passing ( besides short range)

I bought him to link Tavernier headliner but I didn't know I was buying a BEAST! Almost every shot becomes a goal...inside or outside the box doesn't make any difference. He has got great finishing, great free kick accuracy and good heading. I use him in a 3-5-2 near to Muriel UCL Live and supported by Felipe Anderson UCL Live. His sprint speed is quite good and with his strength he can resist for long distance with the defenders behind him. You have to play simple with him and when you are near the box just shoot and celebrate!