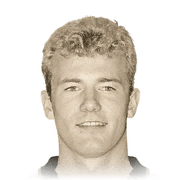 I've been playing FIFA for about as long as I can remember owning an Xbox which is about 5-6 years. In this time I've had ALOT of fun, and ALOT of anger and frustration to match. I cannot deny what joy this card has brought me over the years. I've played well over 1000+ games with this card and scored some INSANE goals. This man, this ICON. This card has saved me countless controllers from the shear fact that you can FEEL the effort that he puts in on the pitch. In real life Alan Shearer wore his heart on his sleeve and that is what gaming has given to me throughout my time playing. This is somewhat a blessing and a curse, due to the fact that I'm now 22 yrs writing a goodbye note to FIFA, this card and basically all video games. Yes as you can tell I'm still a virgin and have never had the pleasure of having a GF, and this is part of the problem of this game.

You play FIFA with the expectation of using your favorite players in real life and being able to do the things you've seen them do over and over again in the 5-10 minute highlight video that some random from a country you didn't know existed made with the background music WAYYY to loud.

The fact is (and this has taken me 5-6 years of playing and heavily smoking the Mary Jane and taking other PEDs to figure this out) this game steals you life, and brings you into a false sense of progress...

Weekend league wasn't even a thing back in the day and I was still a div 2-3 player. And 3 years later Rival became a thing or some shit, and boom more Divs and I'm the same player as I was all those years ago. The time, the money the energy that I have put into this game has (And I hate to say this) THE BIGGEST WASTE OF MY LIFE) The only saving grace of all of this is THIS card.

I got into FIFA because of my mates from school. BUT I'm going to STAY supporting Football and NUFC because of this man.

This card was the only card that truly played like his IRL counterpart. His shots are ROCKETS, His pace (As its his young card) is above average with a hunter, and IRL he may have been able to outpace some of today's defenders. But as you know, that's not how mafia works and I'm continuously forced to use his second and arguably best attribute is his HEART.

Playing against squads that are quite literally the price of a CAR or a BOND deposit of a rental or a fucking OVERSEAS HOLIDAY is fucking illegal. And it's also mirrored by the way these people play as you know.

But the satisfaction I felt as this card/ICON pushed and shoved and WORKED his ass off to score at least one goal a game for me kept me coming back for all these years of pain and torture.

I'm writing this 4000 word essay not as a criticism of whoever is playing this game, or of the game itself. But as a farewell and a love letter to this card, this game and all the memories games has given me. I hope some people who are going through a tough time in their life can appreciate and understand how I feel about this game and the card that is ALAN SHEARER.