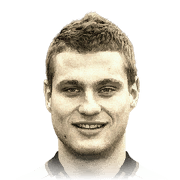 I'll introduce myself first. I'm playing between 2250 and 2350 skill rating with an average of 24 wins in the Weekend League. I decided to change my team around and buy Vidic! So far I've played around 50 games with him and throughout this review, I will give you guys my opinion about him!

At first, I used Varane, but since I like to play with different (not so meta) players, I decided to go for the Serbian God. The only difference I've noticed so far is that Varane is a little bit faster. But because Vidic his strength and defending is so good, I'm fine with him lacking some pace sometimes. I do recommend a faster CB next to him, like Joe Gomez, Walker, Kounde RTTF etc. As I said before, his strength and defending is so good, a lot of people are using the fake shot speeds boost or stepovers which lets you glitch through or past defenders, but with Vidic this is not the case. Because of his strength and how big he is he will just bully players that do these skills. I've always had a hard time playing against CR7, but since I'm rocking Vidic at CB it is a lot easier to deal with him!

Obviously, Vidic does have some cons too, which you will read under this review part. I can't deny that he is a little clunky with the ball on his feet and he doesn't have the best passing, but what do you expect from a CB with this type of body and beastly presence. Also, I do have the problem he is never on the first post with corners, which do make it a bit harder to score corners, but this might be, because of Paulinho who is always standing there.

I hope this review will help you decide whether you will buy him or not! I'd give him a go for sure.

Pro 1: His physical, by far his most dominant stat. Just perfection. There is absolutely no way you are walking through him.

Pro 2: His sliding and standing tackles, magnificent. Every sliding and tackle will win you the ball back.

Pro 3: His heading ability (offensive and defensive) is very good. Scored 6 times with him by selecting him manual on corners.

Pro 4: His movement without the ball feels very agile and fast.

Pro 5: His stamina is very good, never gets tired.

Con 1: Passing is not the best.

Con 2: Does need a little bit of time to control the ball.

Con 3: Might feel a bit clunky with the ball on his feet.

An interesting player, different to use and quite funny if you were a fan of him when he played for United

It has a similarity with VVD but even so I feel a little better because it goes faster than him, it is true that there is also a lot of money for a central but it is what you pay for an icon

A very correct player, I really appreciated how well he cuts the plays without fail but still quite aggressively taking the player off the top

He is a beast

he is noticed quite quickly with a good head

great interceptions and with some quite acceptable steals

He has a lot of energy, a lot of strength is a player who is physically a very good

When I got this card i didn´t expect much because of his pass and dribbling stats. But after 200 games withhim I cn say that he is the best CB ingame for me! I played CB like Varane, Gomez and many other meta cards but he´s definetely the best of them. His tackles are world class, his pace is good and his strenght rocks.

Yes, I have to say that if you´re playing against CR7 or R9 its very hard to defend but against small like Messi, Ben Yedder etc. i didn´t had any problems. I didn´t had the feeling that he´s clunky or something but another con is his long passing stat.

Pro 1: Strenght is from another world! If you 1vs1 against any striker you´ll win the ball just pressing L2

Pro 3:Auto Blocks...thanks to EA, a shot will never get through him just because of AutoBlocks

Pro 4:You can feel his aggressive stat in every minute of the game

Con1:Long passes are not that good so just play it to CB,RB,LB,CDM so he can play that long ball