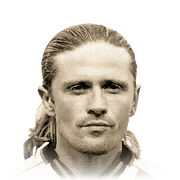 Hello all, this is my first ever review on Futbin and I hope that you would find it useful.

I am not a lucky one in general when opening packs but this time I've managed to get Petit 88 from the base/mid icon upgrade SBC.

I was not sure about him but I've decided to give him a try and oh boy... I was not dissapointed. I've replaced gold Kante with Petit on CDM position along side with Wijnaldum as my team is Premier League based.

I will compare Petit with Kante as stayback CDM in both formations:

Pace - they are almost the same on pace using Shadow chemistry on both. Kante might feel a bit faster due to the fact that he is smaller and more agile/balanced in stats but Petit does the job, he can catch up with others. Don't expect him to outpace Mbappe.

Passing - Petit is very accurate, it's playing a major role as my playstyle is based on passes. His 89 shortpass is very good. I find Petit to be more suitable for my playstyle than Kante. Kante can pass too but Petit is better for me.

Shooting - Not something that you should try with a pure CDM but he can score easy chances. Same with Kante.

Dribbling - This is a tricky one. Petit is taller and lower on agility/balance, also High&Average body type. Compared to Kante, it is a difference. Petit is not the smooth guy you are looking for but he does not feel clunky at all. Petit can turn and feint opponents in the midfield. He might be problematic on poor connection but every player is when that happens. At first I was a bit worried that he might be very slow but it turned out that he is very playable actually.

Defending - Now for the important part. I've played Kante for a while and wasn't pleased at all with him. Don't get me wrong, he is not bad but not the midfield gamechanger that you might expect. Petit came right in time for the Weekend League and made it to the first 11. The first major thing you will experience while playing Petit are his workrates. High/ high will get him in the position you need, both attacking and defending. He is very accurate tackling, almost(broken animations might happen but that's the game) every tackle is clean and smooth. His interceptions are phenomenal, he is always in the right spot covering spaces left by other players and can really save the day when the opposition launches a quick counter. Petit did change the midfield experience for me, offering a strong player in defence and a good passer up front while building.

Physicality - Definitely better than Kante. Petit can body strong players and collect the ball quite easy. Protecting the ball on 1v1 situations is a big pro, his height and strength are the best arguments on this one. Does not require Anchor or other physical based chemistry. Heading accuracy is fine for passes or clearing the ball. 75 jumping is not a huge deal as he is quite tall. He might not win every header while defending corners/ crosses/ lob passes against Ronaldo or other broken header players but it's a huge improvement if you are coming from Kante especially.

Stamina - Petit can last a full match with no issues, unless you decide to go pressure but that's not going to kill only him... it's going to kill your whole team so play it wise.