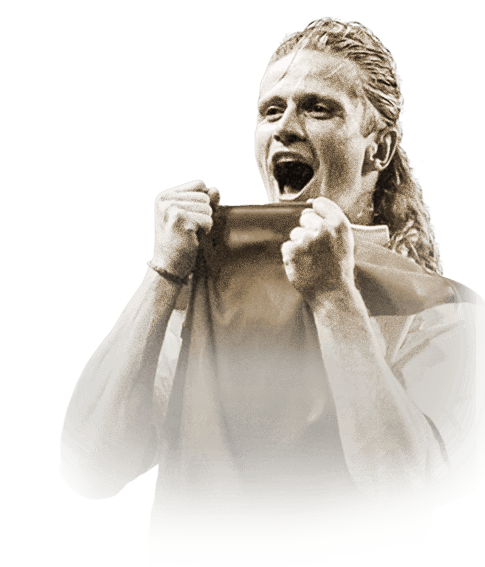 I used him as my LDM in the 4-2-2-2 formation and applied the Shadow Chemistry style to boost that Pace primarily. I also tried him as my left CB during the 2nd half of all the games I played with him.  I played 4 games in Division 1 Rivals. I used the stay back while attacking instructions as well as the balanced instructions on him, to see how his AI moved in-game. Let’s begin.

1.4 million is a decent price for him to be completely honest. But, if you’re on a budget, you can pick up equally comparable players at a fraction of the cost (i.e. Kante, etc) :/ A fair price for him would be 900k coins, and that would represent amazing value for him.

He is French and hence can offer great links to meta players , and can also be used as an amazing CB. I am still confused wether to play him as a CDM or CB, and I am tempted to opt in favour of the latter.

I would say he is a meta CB, But not a meta CDM as his dribbling lets him down just a bit.

If he had better dribbling capabilities and a better weak foot/skill moves, he could be classified as a meta CDM. At CB you don’t need the weak foot or the boost in dribbling and hence is a meta CB imo.

He is outstanding in terms of his PASSING, DEFENSIVE and PHYSICAL abilities and his Defensive AI is exceptional as well, and if you’re a French fan or a Gunner, you will absolutely love this card, as he is truly a  versatile defensive beast!

His pace overall is quite impressive for a CM/CB.  A combination of 77 Sprint Speed and 79 Acceleration when boosted by a further +10 with the Shadow chemistry style, make him feel quick while tracking back/moving forward as well as jockeying. He could easily catch up to any on-rushing attacker running parallel to him and managed to push them of effortlessly, and this is due to his massive frame and body type in-game. He has incredibly long strides, which make him cover ground even faster, and due to this he feels quicker than his stats say he is. He feels like an 82 Sprint Speed player rather than a 77, to be honest.

He has great passing stats with a combination 85 vision, 92 Short passing and 94 Long passing. So you can spread the ball with him around the pitch effortlessly on his stronger foot.  His 3 star weak foot is safe to make short passes with too, but don’t try using it under pressure as he can misdirect a few passes on his right foot when pressed.  So just keep his passing to his stronger foot and he can be used as an effective ball playing CDM from the back!

He has insane defending stats across the board, and when further boosted with the Shadow chemistry style, and barring his defensive awareness stat of 93, they are all MAXED out. He was superb defensively on the stay back while attacking instructions, and NEVER pushed out of position unless I manually prompted him to. The High/High work rates were negated with the stay back instructions, and only when I used the balanced instructions did he make a few supporting attacking runs. Petit has an amazing body type for a CDM/CB as he has a super wide frame in-game. (Probably the biggest looking player that I have ever used)

And that HUGE WINGSPAN from the CDM/ CB position enhances his defensive abilities in terms of his overall jockeying  and his AI’s ability to make auto-blocks and interceptions. His octopus like legs and insane reach could make his character lunge in and dispossess my opponents effortlessly.

His tackling, positioning and rate of intercepting my opponents play were outstanding! Hence, defensively he is an absolute monster at the back. I was honesty blown away by his performances at CB. He was almost unbeatable at times. It was a real pleasure to defend with him as he made it so easy!

HE IS A MONSTER OF A CDM PHYSICALLY.

90 strength makes him push off ALL on-rushing attackers and midfielder effortlessly. His wide body-type improves his ability to shield and bump players off. His 96 stamina is more than adequate to last him the whole 90 or even 120 mins effortlessly. He’s 6”1 in-game which is a great height but feels even taller somehow, and with his 80 JUMPING he will win you most headers he contests.  He also has 93 aggression and you can press down your opponents attackers very effectively! His wide frame is so difficult to get around, which makes him one of the best players to manually press! 9.3/10

He has an average finishing stat of 74, but sue to that composure statistic of 91, his finishing inside the box is better than that stat suggests. He has incredibly high Long shots and Shot power stats of 91 in both respectively and can belt them from range and can really test the keeper. Dont try the finesse shot from outside the box due to the low curve stat of 74 as the keeper will save most, but inside the box it should work fine. He also has the 3 star weak foot, hence shoot with the right foot when absolutely necessary!

His dribbling and responsiveness weren’t the greatest tbh, but it wasn’t the worst by any means!

He has average dribbling statistics, with a combination of 81 Agility, 76 Balance and 75 Dribbling and with that wide and tall frame, he may feel a bit sluggish to turn with in delayed gameplay.

I honestly did not need to make him feel more responsive in-game, as I wasn’t planning to weave in and out with him or skill past players. I just wanted to use his dribbling to be functional, in terms of jockeying and straight line sprint dribbling and it was absolutely fine to use in that aspect. I was effectively using him just to break up play and make the pass quickly.

I switched to the Engine Chemistry style, and that helped him out a bit in term of his responsiveness, but I’d still opt in the favour of the Shadow chemistry ,as I really needed that pace boost to catch up with the quicker meta attackers.