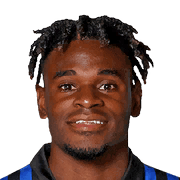 One of the most important things this year is counter attacks. How is a 85 pace, with hunter, with 67 agility good for counter attacks? When I have a short, agile striker, I have no way to link the play, when I pass it to my striker, the CB always steps in front of him. Zapata is super important because when my CB or CDM wins the ball, I know Zapata is open and will not let the CB beat him to the ball. Once he gets it, he can lay it off to my CAM, and he can play the wingers through, or dribble up the middle. His shot is amazing, his passing is good, and he is a nuisance in the press because of his strength he will body weak ass CBs like Militao or Gomez off the ball and make them want to retire. DO NOT try to dribble around the box with him, pass or shoot it. After he gets a few informs, this card will look tasty.