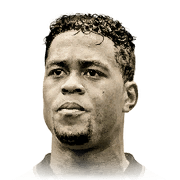 About a month ago I packed this beast in a 25k pack. I decided to give him a try and boy did he exceed my expectations. I play mainly weekend league and usually get gold three or above and this man single-handedly made me play better and enjoy the game more. First of all, I was impressed with his dribbling. He feels very good on the ball despite his height and body type and the 4* skills is a big bonus. If you get the ball to his feet in the box then he can be relied on to go past defenders and create a chance. Also due to his strength and size, he is very hard to push off the ball even for the likes of Virgil Van Broken and Varane. His shooting and positioning are very good. I have used him for just over 100 games now and he is still banging in goals and he has a near positive goalscoring record. His finishing feels lethal and he is always in the right place at the right time. He is also very good in the air and can pull off some wordlies due to his flair trait. His passing in the build up is also very good and he can be relied on for a good cross box sweaty. Also, he is very wide which makes him good at winning the ball back while pressing. The only thing I don't like is that sometimes he misses shots, especially while turning due to his low-ish composure.