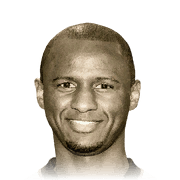 At first, I wondered why this guy was 1.6-1.7 million with pretty standard stats for a CM. BUT BOY WAS I SURPRISED. This card is HANDS DOWN the BEST CM/CDM IN THE GAME. His animation in game makes forwards just crumble when he gets in front of them. No matter how they try to dribble around him, he just stops them. Most players will try to pass to another player away from Vieira because he's just TOO GOOD. But they can't run away from him for long. Even without a chem style on his defending he can still defend. I use an Engine chem style to boost his dribbling and passing and that just about does it. However, there are times where he just stands there and I don't know if it's just the game or a broken mechanic but sometimes he will stand still and you have to switch to him at the right moment for him to get back into action. THAT BEING SAID, Vieira is still great. I've only been able to afford him this FIFA and I can only imagine how good his prime/icon moments card is. If you have the coins, get him. Put him as the captain and he will lead your team to victory.

You have to control him sometimes. (SUPER SMALL DETAIL)