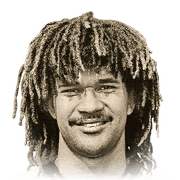 I have never written an review before. Often beacuse im too lazy, players not worth the time or the fact that i dont use english daily. This guy changed my mind! He deserves to get a review!

When i got him out of the mid or base icon sbc, i couldnt belive mye eyes. I was slowly giving up FIFA at the time, little did i know that this guy would make the game fun again. I had a team worth 4 mil, 2 mil untradable + 2 mil coins (xbox), but i didnt know where to play him. I got a player that was worth as much as my entier team and wished to use his full potential. There was almost no reviews on him so i had no idea how to use him. Ended up playing him lone cam, best thing ive ever done. Mans crazy on the pitch! He runs behind, score goals with both feets, plays perfect balls to everyone, dribbles past defenders, win balls high up the ptch and pushes EVERYONE away. Hes isnt the best in every stat, but he is class at every stat. He dosent have mbappes speed, ronaldos shooting, kdbs passing, messis dribbling, vvds strenght or kantes defending, but this guy is a "6 in 1" player. The closest u can get to all of them in one card, he got it all and it shows.

Im an div 1 rivals player (just so u know i aint complete trash). Afer i got him i had 10 wins in a row. he Changed the game for me. If u have a solid team, dont think twice, go get this beast!

My objective this year was to try 90 Gullit, who I've always seen as THE player to run the midfield. When I bought him, I was super exited. I played him as CM in a 41212(2) and in a classic 442. I really thought he would be better than what he was for me, not that impactfull, good player don't get me wrong, but not amazing like I've heard.. He felt quite heavy, not really agressive, just like he was a normal player.

I was also quite surprised by his stamina, which is quite high but felt low in game, he was one of the lowest player on the pitch at 70'.

I think for this price, you can have much better, but it was fun to try him though.

When I packed 90 Gullit from the 89+ Mid Icon Swaps Pack about a month ago I could not believe my luck. Given my history of horrendous pack luck, I firmly expected Laudrup or Moore instead of a 6 mil icon. Also, since my team was around 1 mil I thought he would be a "gamechanger" (I don't know what happened for the guy who wrote the other review). 150 games in and he has been anything but a gamechanger. Before I review every stat, two things must be said: Firstly, I have played Gullit as a CDM, CM and as a CAM. He played best in CDM and hence this was the position he played the most for me throughout the different teams. Secondly, the worst part about Gullit is that: when EA realizes the game runs smoothly for two to three consecutive matches and that it is now time to screw you over by giving weird goals to your opponent and/or giving your players weird disabilities to prevent from controlling and passing the ball like a normal human, Gullit is the worst. I swear to god that somewhere in the Fifa source code there is one line that states: "In order to keep the game as shit as it is, we let Gullit play with the concentration of a drunken ADHD toddler in regular intervals. "

PACE: One of his best attributes. Played him with Shadow, Catalyst and Engine. Felt like 88, no complaints! 8/10

SHOOTING: 88 is a lie. Gullit will finish most of what is expected but anything special like Longshots, Finesse Shots or Shots from a more challenging angle is impossible. Shots either go above goal or straight into the goalie's arms. Compared to for example Maradona Middle or Luis Hernandez middle icon who have 91 and 88 shooting his shooting is simply much worse. So to conclude, his shots are not terrible but far from what an 88 would suggest. 6/10

PASSING: Bad. Literally, any other midfielder I have used alongside Gullit has better much better passing. (RTTF Zakaria, Recordbreaker David Silva, SIF Delaney, Valverde ...). On good days, his passing is alright. But like every third match, he manages to get 7/10 5m passes straight into the opponents feet. In these games, I completely avoid him in my attacks and often play it to someone who is in a worse spot because if Gullit gets the ball he is almost guaranteed to lose it. Best thing about his passing are his freekicks which are good but not as good as Suarez Moments or Maradona's freekicks. 2/10

DRIBBLING: Sometimes even worse than his passing. I normally do not dribble with players his size and actually feels quite alright when I need some R1 dribbling from him. The big problem is his wretched first touch and general ball control (especially in the games where EA hates my guts). Sometimes he intercepts a ball really well only to give it back to the opponent because he cannot stop the ball from going 10 meters away from his feet.. 4/10.

DEFENDING: Lowest stat on the card, but Gullit can defend pretty well (exception: slide tackles). His headers, especially in offensive situations, are a bit of a letdown. 7/10

PHYSICAL: Very good. Bullies most other players. Stamina is also enough even when the game goes into extra-time. Problem is that gets the ball due to his good physicality and then proceeds to immediately lose it due to a poor pass or his bad dribbling abilities. But that is not related to his physicality so: 9/10.

Closing words: Gullit is a good player when you use him only for defensive tasks but even then the price is completely unjustified which is why I cannot recommend anyone to buy him. Offensively, I think he is very bad which why I played mostly in a CDM role. His tasks can be executed even better by Kante, any special card of Kimmich, Delaney SIF, Zakaria RTTF and many others for a tiny fraction of his price. These cards are also at least as usable as Gullit attacking-wise. I only played with Mbappe Toty in Drafts and on a friends account but I am completely sure that you should put your money on Mbappe or actually any other player with a comparable price instead of Gullit.

PS: I normally reach Gold 1 in Fut Champs which is where I played with Gullit the most. And yes, maybe he is not my type of player and you might have more fun with him but honestly, if you saw some of his performances for me, you would come to the conclusion that he cannot possibly be worth more than 10,000 coins.