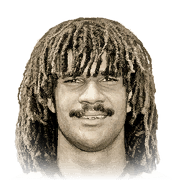 absolutely insane with a cat chemistry style at centreback. stopped everything his hands and didn't concede a goal at striker either. compared to varane he looks like prime maldini next to harry maguire. he is always stopping shots and then going up the field to score or assist. played him in one game and he scored 10 goals and assisted 5 goals cos he's a selfish boy but that doesn't matter he's incredible. you have to get him if you want you're centreback playing in goal and at striker at only 8 million coins. i really recommend him to you and i hope you enjoyed this review of Kepa.