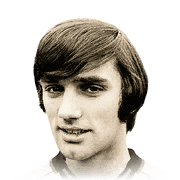 Yeah what can i say ? As a die hard Man United fan as myself you cant go wrong with this card! absolutely stunning he is, fast, agile, and deadly shot, playing him as a striker in 4-1-2-2(2) alongside Werner at the moment, Im not a great player (div4) but georgie boy carry me thru WL with that number 7 on his back, He last the whole 90 minutes if you have him stay forward and if it comes to overtime he can get a bit tired, but its worth to have him on pitch, just because he scares the opponent! LOVE THIS CARD and he is well worth the big bucks ! Lookin on up to the spirit in the sky, thats where im gonna go when i die, when i die and they lay me to rest im gonna go on the piss with GEORGIE BEST!

Maybe a little weak physicality but he runs past the most !

Pack pulled from the BASE ICON pack..... I was no where near as happy as I should have been! WHAT A PLAYER! 4* 4* is perfect for the card when played in ST with a fantastic goals to games ratio, pulling up with truck loads of assists. Tbh I'm not sure why he is only around 1MILLION coins, worth every coin is your buying him. If I had to compare him to any other player it would have to be with the likes of a mid Cruyff, but with better balance and reduced WF/SM.

Since his introduction to FIFA i have never used him up to now and BOYYYY did I miss out.

HELPFUL TIP: I played him as a striker in a 4-1-2-1-2 (2) along side Van Bergen. Due to Best's lack of physical the ability he has to play it into a secondary striker, if needed, means he can avoid many physical challenges.

IMENSE DRIBBLING (slippery as a lubed up ice cube)

4* SM (In reality he was one of the most skilful players to grace the game and truly deserves 5* SM, however 4* SM is GREAT!)

aight so lets start this off this a little context: I'm a Div 3 player, I like to use skills and quick but patient passing play to make space and beat the opponent. I have a fairly good team with players like kante, dybala, klaiber and (im a disgrace to society) varane. I got Best from the base icon pack from swaps.

This doesn't really fit in any categories but he seems to get a lot luckier than other players on the pitch. Like when he's tackled, a lot of the time he will just get the ball back instantly and smack it bottom bins

Pace - Although i was tempted to use a deadeye, i thought it would be safer to go with the overwhelming majority and use hunter for the extra pace. Best can beat players fairly easily, he is a fast player but he's not even close to adama/alphonso levels.

Shooting - there are some players that will smack in shots consistently no matter what angle - Best is one of those players. He doesn't have stupid shot power or insane curve but he is incredibly consistent at finding those corners.

Dribbling - Solid dribbling and ball control, not quite neymar/dybala/mbappe levels but he has very controlled dribbling and can perform most skills moves well.

Passing - oh my god his passing. Usually his passes are fine but so many attacks are broken down by him not being able to make a stupidly easy pass.

Physicality - Quick and simple. If you make contact with someone, big man George is gonna end up on the floor.