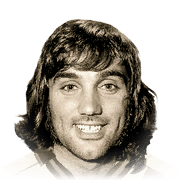 George Best is definitely the best right winger in this game.

This guy man! The Ballon d´or winner George Best plays just as well as he should. He fits my team perfectly as a RM, I have IF Rashy and Cantona upfront and as a United fan I decided to go for Best instead of Mbappe and man thst was a great decision, I was planning on playing him at ST with Rashy and Cantona in the CAM position but I ended up playing him RM and he played best there. He´s so unpredictable for the defenders cuz he is right footed 4*WF so he can cut in for a shot or keep going for a cross. I love that card.

I played him in 442 and 41212(2) formation as a RM and as a ST, I prefer him as a RM cuz of his positioning as a ST and lack of shooting traits but he´s definitely good at ST he just fits my playstyle more on the wing

I dont think it matter alot on this card this card is just so good, I use Hunter on him btw.

Yeah he costs alot, I will give him 4 and a half stars out of 5 cuz he is so worth it if you buy him for the right reasons

As a ST buy him if you have the coins

For some reason I think icons have hidden stat boosts in game becuase his pace felt like its in the high 90s and he finishes everthing left foot or right foot. His shots feel extremly powerful especially when its taken first time it just seems to rocket into the corners of the net. Tough angle finishes that wouldnt usually go in with my neymar and mbappe goes in with george. Near post shots in weird angles goes in when you load enough power to hit the roof the net the keeper jus kinda falls backwards lol. Across goal shots always find the corners. Finesse shots with him is kinda inconsistant tho, weirdly enough it lacks power after Ive been talking about how good his shot power is. I would jus go for power shots with him unless its a perfect situation for a finesse shot. I had a hunter on him btw.

Hes the best dribbler Ive used ingame (except loan toty messi), his left stick dribbling feels so nice because of the perfect combination of height, body type and dribbling stats also hes one of the best dribbers in football history so im happy ea did a good job with him. Other than the lack of 5* skills his dribbling is perfect. I have no issues with his passing. His defending isnt the best but he does fight for the badge, although he only has 68 strength and 61 agression, if you press with him he is suddenly has akinfenwas strength and ramos's agression and puts his body on the line to win the ball back. After he wins it back due to his high balance hed stay on his feet dart forward with his 99 pace. I also future stars steven bergwijn in my team who has 94 strength but it feels like they have the same strength.

An example of his strength and will to die for 3 points is when a over the top through ball was hit and him and baby rio ferdinand was having a chase down. Best wins the race and heads it down, Rio catches up and attempts to muscle him off the ball. Best cuts in with a 45 degree fake shot while rio was still trying the push him off the ball. I thought surly rio would win the strength battle but I was wrong, george best shoulder barges rio onto the floor and sweats it to neymar. Completly embarrasing baby rio. Also sometimes when he does a ball roll, he breaks the opponents ankles. Idk if the opponent pressed tackle or if he was just jockeying but it jus makes the opponent fall to the ground. Ive never seen that animation before even when i ball roll with neymar and mbappe or when I come up against pele and r9 my defenders have never been ankle broken.

His stamina isnt the best but I never sub him off cus Im kinda bias and he still plays good even when hes tired.

Overall I would definitely reccomend this card. He has everything. Hes also versitile as he can play st, cam, rm ,lm but I wouldnt play him out wide in a 5/3 back becuase of his stamina and he plays best when hes infront of goal.

Hi guys! This is my first ever review. I wanted to do one for a special player, and it ended up being him. I got him in my Mid-icon pack and I was so happy. I tried him in Rivals as a CAM in a 4231 because i felt bad using him on the wing, I wanted to play with him the most i could. But know after 20 matchs I can tell you that the centre is not his best position, he always needs something more. KDB and even Firmino were better for me. Use him on the wing always, but if you want to use him as a ST with another ST (like in a 442) you can.

78 stamina (always change him in the 70th minute)

Not "finesse shot" trait (unless you are inside the box or 1vs1, he always missed them)