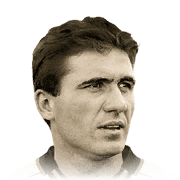 So I packed him in my base icon pack and whilst I was not over the moon I didn't think it was terrible. He went straight into my team as a cam in a 4-2-3-1. I played 5 rivals games in div 2 with him and wow he was sensational. I previously had cams that had really poor passing and so as soon as I used him, the difference was crazy. I clearly put a hunter on him although his pace was not amazing but was good enough in behind. His passing is ridiculously good. He was making passes I did not know you could make in fifa and it helps a lot with a storming fast attack in behind with Werner and Rashford. Being small and agile his dribbling was to no surprise very good as he could weave through defenders easily. His finishing was very good in situations you would expect him to score but he never scored goals that really took you by surprise yet he didn't miss any chances where you would say "damn he should have scored that". Lastly, his attacking runs are game-changing and I have never seen someone do it. Whether its the work rates or I don't know but he always makes the most perfect runs in behind in perfect areas of space. If you pack him or are thinking about using him, I suggest using him as he is very fun as well.

Hey guys, today I will review the base icon of Gheorghe Hagi. I packed him out of the base icon pack from the swaps and I know how you feel when you packed him, but give him a chance. He isn't that bad tho. I play him as the central CAM in 4231 and he is really decent playing there, he even scored 20 goals and 13 assists in 26 matches, which is really good. (Chem Style: HUNTER)

86 isn't the worst but also not the best for a CAM. With HUNTER his pace is really solid, but he seems still a bit slow,, but he is for sure fast enough for a CAM.

His shooting stats are lying. He has definitely more shooting than 84. He scored some bangers I didn't even think Joao Felix POTM, who is the striker in my squad, could score. His long shots are incredible and his free kicks are amazing too.

Hagi is really good on the ball. He has the agility and balance to outskill the defenders and the other dribbling-stats are solid too.

He is a CAM so that doesn't matter.

A CAM doesn't need strength that much, but he gets checked away really often and that sucks.

Found him in my baby icon swap and was very disappointed. Back then i was using a shit squad as i was a division 5 player hitting silver 1/gold 3 so i had to put him striker in my squad. Nearly scored me 150 gol in 150 game. My opponents weren't very good, i know, but this guy is an hidden gem. Agile, fast, 4*4*. The strength isn't a problem, the only con is the finishing but it feels like an 85, however the shot power compensate a bit. After 150 game i wanted to change squad and i needed to put him in bench. After 1 month i got tired of that squad and created a new one him. In that period i got better at playing (division 2 and nearly hitting gold 1) and changed my playstyle. I now started using him cam in 4312. I fought that against good players he would have suffered but this didn't happen. Used him this entire wl and hit 20. At cam he his a beast, better than st, very good passing, outside shoot, 4*4*, occasionally finishing and the workrate feels good. He seems also pretty aggressive. Currently he has played 217 game with 165 goals and 89 assists.