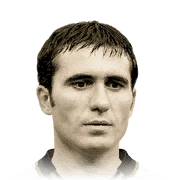 After a culmination of losses on FUT Champs and sitting on 13 wins with 8 games left I was in desperate need of some inspiration, I had 800k in the bank and wanted a player to come in and change everything. I had been a big fan of Hagi for a while and he was always on my radar, I took the chance and got him for 720k, it's fair to say I haven't looked back since. I ended up winning 7 out of my last 8 games with Hagi in the side, he had dragged my team and transformed them. I used Hagi in a 4-2-3-1 narrow playing behind Inaki Williams rule breaker and Fati and IF Lozano on the wings. If you are considering buying this card then do it, you will not regret it.

Shooting: Hagi's shooting is nothing shy of phenomenal. The most clinical finisher I have used and his shots from outside the box are lethal and always seem to trouble the keeper. Not to mention his finesse shots on his left foot always seem to find the far corner.

Dribbling: The ball sticks to Hagi's feet like glue, his close control helps him weave through players especially in tight areas. His agility and balance work really well therefore he doesn't tend to get knocked off the ball and his physicality isn't a problem due to his great balance.

Passing: His through balls are perfect, every single time. They always seem to be weighted perfectly and he is absolutely brilliant at unlocking defences that are sat in a low block. Have trouble breaking teams down who just control the CDM and let the AI do the work? Hagi will help you overcome that no problem. If you have Hagi playing in behind a pacey forward then I wish your opponents luck.

Stamina: This is his only clear negative. By the 70th minute or so his energy seems to be so much less than everyone else's, it doesn't impact him too much as he can just drop deeper and spray passes out wide however it is certainly something you should be wary of.

Acceleration: His acceleration can be slow sometimes in that initial burst of pace, it isn't terrible by any means, however he will not blaze past defenders. This isn't too much of an issue as you will get used to his ball control and dribbling to get past players instead.

In real life I am his huge fan. Powerful left foot. Pass, dribbling he has everything. In older FIFAs I used to sell him after a few matches because he was somehow really weak in-game. But not this year. He floats, he flies... I use him mostly as CAM behind SON and WERNER IF. 11 matches I played with him, 10 wins in rivals. I was in div 6 before Hagi... Now I'm div 4 player. This guy is literally a captain. All team's attacking behavior changed after Hagi.

he holds up play very well in the middle he has great pace great passing dribbling basically everything, definetly worth it at cm cam or even cf