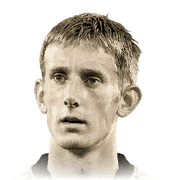 I Did His Sbc cuz i had a lot of untradeables in my club.also my defence is opara rulebreakers and long obj,so i used to sub de gea in ingame.now i have a good goalie aswell.decided to try him and He Couldnt Not save,trust me.he saved every single shot,but still conceded 1 only in 2 wl matches.its worth it if u can easily afford it but dont sell big players for him when u can get cheaper gks who are still rly good

Packed him out of my base icon pack and thought he is an big L, but he's a great keeper. He saves a lot, especially in 1v1s

Because he's so tall. I've tried a lot of keepers before and he is the best of all. If you have the coins try him.

I got this guy through the base icon swap pack and I thought he was gonna be really good just from looking at his stats. However...he's a pretty average keeper and not worth the price of his regular card or SBC price. Buy De Gea or Hradecky's Headliner over this. He is able to make some really good 1 on 1 saves that you would expect the opponent to score but he also lets in some really questionable goals. I notice that he gets beat near post more often than Hradecky who I use quite often in my team. His passing anywhere before midfield is almost spot on and he is very good at coming for crosses. The negative side is that he doesn't always deal with it in the best way or finds some way of parrying the ball directly in the path of an attacker. Not really sure what other people are seeing in this card. IMO only use him if you got him untradeable.

Falls to the side too quickly, doesn't "stand his ground"